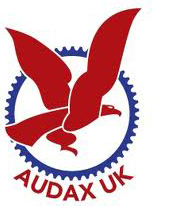 Audax United Kingdom is the internationally recognised long-distance cycling association in the UK.

Usually referred to as Audax UK or AUK, it was established in 1976. AUK oversees the running of long-distance cycling events in the UK, and, using a system of timed checkpoints, validates and records every successful ride.

So far quite straightforward.

I decided to Join Audax in January 2013 to give focus to my cycling and to take part in organised events and ride with other – mostly much more experienced cyclists.

The first thing I leant is that the Audax year starts (randomly) on October 1st – so I had missed three months of points gathering when I joined.

When I joined I received a quarterly A4 magazine, called Arrivée, packed with information, event updates, letters, stories and photographs and a yearly handbook. 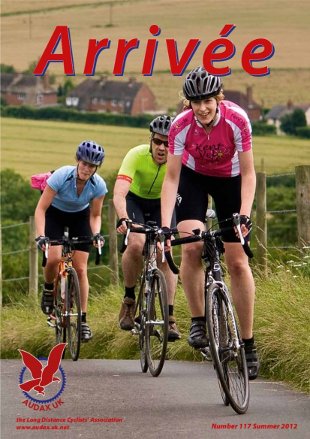 I also had access to the web site giving up to date details of events and results and inclusion in the AUK Awards and Championships structure.

I had a look at the Audax Uk Handbook. It starts with a potted history of AUK (there are lots of acronyms – get used to it). It then tells you a bit about preparation for a Randonnee. At this stage I wasn’t exactly sure what a ‘randonee’ was but let’s just accept it is a long bike ride – touring rather than racing. One important fact about Audax is that the rides are non-competitive and it’s actually against the rules to list riders in finishing order with times, so as to discourage competitiveness. There are minimum and maximum speeds for each distance. The other important point is on all events you have to find the route yourself. You are provided with a detailed description but the route is unmarked. Getting lost seems to be de rigueur. I use my GPS.

There are 3 main sorts of rides:

The obvious place to start was a Calendared event local to me. So I entered the Glastonbury 100miler – 160km (Audax distances are in kilometres). The event took place on 17th February 2013 and was organised by AUK Chairman Ian Hennessey. It started at Honiton. There were about 45 riders – about 50% had the beard and mudguards but many others were on carbon racing machines and were under 40. There were 3 other women – 2 on tandems behind men. Everyone has a Brevet Card.

This is a tri-fold piece of card. The front has some pictures and in this case said ‘Brevet Populaire’ . 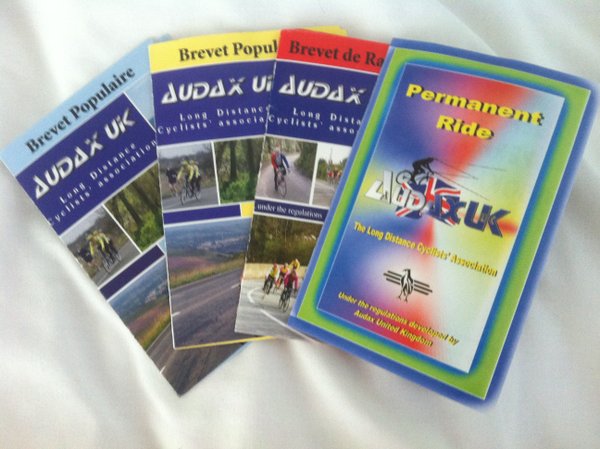 Inside was the name of the ride. ‘Glastonbury 100miler – 160km. Then there were 8 boxes which the rider has to collect information at ‘Controls’. This is usually a ‘Stamp’ or receipt. It is to show proof of passage. Sometimes you have to answer a question about a control – a bit like a treasure hunt. At the end of the ride you hand in you completed Brevet Card and it is sent off for verification. If all is well the ride appears in your personal results tally. The back page is filled in after your ride has been verified and the whole card is returned to you. There is also a form to fill in with your personal details and emergency contact.

It was a great ride. The weather was good. The other riders were universally friendly and kind and I really enjoyed it. I was told by one seasoned AUK rider that there are few women who ride Audax as it takes a certain mind-set. I wasn’t sure how to take this but I already knew that Audax riding would need determination and a sense of humour. This first ride sought hills gratuitously and writing this a few months on I know that this is a feature of Audax rides.

The next calendared event I did was called ‘The Primrose Path’ and took place on 24th February. The weather was especially cold and there weren’t any primroses. There was quite a lot of ice and lots of hills. The ride was 100k and attracted 2 AAA points.

AAA – Audax Altitude Award. The stated aim of AAA is to encourage participation in hilly events. AAA points are allocated to rides which are hilly enough – at the rate of 1 point per thousand meters of climbing, eligible events have a minimum amount of climb which varies with distance.

On this ride most people were on touring bikes with mudguards and fat tyres. Most of the ride took place on narrow lanes which had mud and gravel so I was pleased to be on my touring bike. About half way round this ride the control at Cattistock was a fellow cyclist’s house and there was a magnificent spread of wonderful food which we just helped ourselves to. No one seemed in a hurry to leave and it was all very friendly and sociable. I was a lone female amongst the beards.

At the end of the ride once again there was food. Loads of it. Cooked to order and delivered to your table. It was wonderful and as a newbie – totally unexpected. Never have beans on toast tasted so good.

The next local event was a Brevet de Randonneur. This is used to describe a cycling event of 200, 300, 400, 600 or 1000 km controlled through a series of time and distance checks by means of a brevet card and subject to AUK regulations. So, the same as a Brevet Populaire only longer – minimum 200k. I now know that it’s the 200k and longer that really matter! (Though how anybody can ride more than 200k in a day beats me).

The Mad March Coasts and Quantocks took place on 3rd March 2013 and started at Exeter. We went down to Budleigh Salterton and then all the way up to The North Somerset coast. The controls included a couple of cafes for sustenance. It was a hilly ride and it attracted 2 AAA points. Once again there was a control at about 170km at a cyclist’s house. The spread of food on offer was truly amazing and the generosity and kindness of the people cooking and serving was wonderful.

There were no Calendared events nearby coming up so I decided to have a go at a ‘permanent’ next. The permanents are listed on the website and there were quite a few fairly local. In April I did the Honiton 100k – usual stuff – little roads, very scenic, and as many hills as possible.

I then went off on my LEJoG adventure which was recorded as a Brevet Populaire. Free route but riders must get from tip to toe (or vice versa) within 18 days 1 hours and 20 minutes. This event does not count towards the AUK points championship.

I rode another hilly 100k Perm from Honiton to Watchet and back at the beginning of June.

Up until this point I had no interest at all in collecting Audax points. There are loads of awards with many variations. However I was gradually understanding a bit more about what Audax is about and decided to try to get a Brevet 1,000. This is 5x200km events ridden in one Randonneur year. I had the Mad March 200k in the bag and so I sent off for Brevet cards for 3 permanents – Sea and Levels, Exmoor and Valley of the Rocks. I also decided to have a go at a DIY. DIY events are rides where you plan the route and choose the date yourself.

I had planned to do the Dorset Coast 200km in April but I was ill and missed it. Naively I assumed that I could just use the route as a DIY as it is a Calendared event. I submitted the route card online to a very nice helpful man Tony Hull. He has patiently explained the rules of DIY to me in a long exchange of e mails. The main thing is that the route has to be verified as being over 200km before you ride it and the route is measured using Google Maps shortest walking distance. The route is then verified by your GPS track or traditionally using receipts/stamps as proof of passage. So last Wednesday I set off to ride my 200km route which had been verified by Tony. It had almost 3000m of altitude so if all went well the GPX track could be sent off to ‘Mr AAA’ Steve Snook and I would get an AAA point too. It was a lovely day and a lovely route. As it was a DIY it started and finished at my home. All was going very well – I was on time, I wasn’t lost and I had enough food and drink. And then the Garmin Edge 800 decided it had had enough for one day and at 178km the battery died. Disaster! I collected receipts for the last few controls – and that nice man Tony was very understanding and decided that I had enough evidence for the ride to be verified. However the GPX track that the Garmin produced was corrupted and the elevation data was missing so no AAA points.

Yesterday was the hottest day of the year. I decided to do the Sea and Levels Permanent and started riding from Lyme Regis at 07:00. It was a lovely ride up to Clevedon. 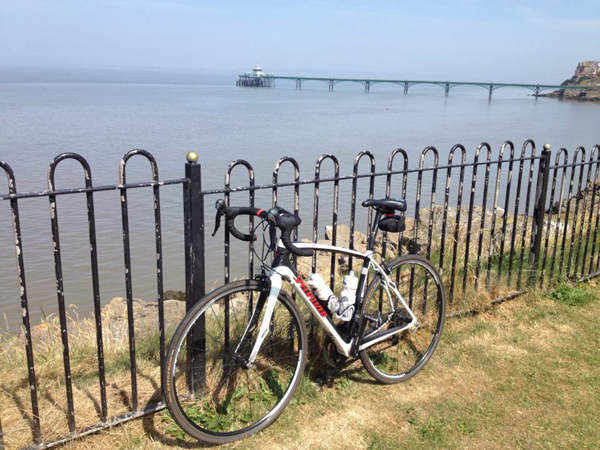 There were plenty of places to get the essential fluids in the temperatures creeping into the 30’s. I tried to enjoy the rare experience of riding in UK and knowing you were going to stay warm and dry and not carrying a waterproof. It was very hot though. Once again the Garmin failed after 9.5 hours with about 30k to go. However as this was a permanent it didn’t matter as the ride is verified with a Brevet card and I collected the evidence at the controls. No AAA points again as this ride wasn’t hilly enough.

I was quite tired at the end of 200k. Things hurt – neck, shoulder, hands , feet, sitting bones. At this point I can’t really see me taking on a 300k – or anything longer. It just wouldn’t be fun. Too hard!

Next up I have the Valley of the Rocks 200k Permanent and also an Exmoor Permanent. The plan is to ride them in the next couple of weeks. So all being well I will have the 1000 Brevet for 2013.

There are many different awards in AUK and I can’t really get too excited about them. However, I like the Audax ride because they are great routes and they take me to places I wouldn’t otherwise go to. I will try to do more Calendared events as I have really enjoyed the ones I have done and riding with different people is interesting and enjoyable.

The other thing about Audax which I haven’t mentioned is that it’s very inexpensive. Membership is £19 for the first year and £14 thereafter. Perms cost £3 to ride and Calendared events range from £5 to £10. When you compare that to the entry for a Sportive it is very good value – especially with all the free food!

9 thoughts on “The intricacies of Audax”