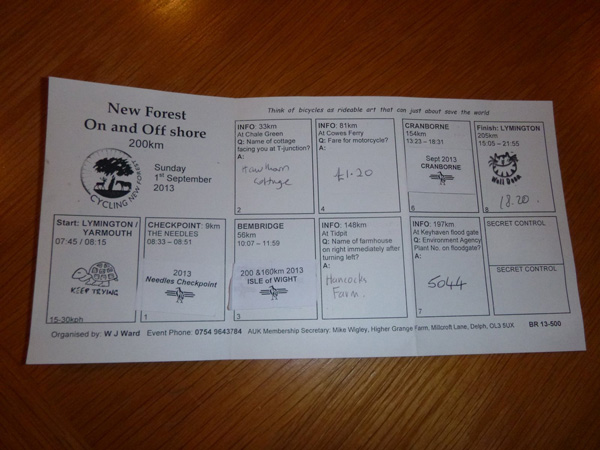 This is an Audax event organised by John Ward who organises other cycling events based at Lymington.

The start is at the Lymington ferry terminal. Cyclists are required to be ready to board the ferry at 07:35 ready for it’s departure to Yarmouth on the Isle of Wight at 07:45. Before this Brevet cards and ferry tickets are collected from the event registration.

The Old Bat was quite intimidated, as all the other riders seemed to be young, fit men with very snazzy bicycles and coordinating outfits. On closer inspection as the day went on some did not match up to this first impression. I did, however, only see 4 women on the 200km ride.

There is plenty of time for coffee on the 40 minute crossing to Yarmouth and there was an excited buzz as the riders looked forward to cycling round the IOW in near perfect weather warm, sunny and light winds. As the ferry approached Yarmouth the tannoy requested cyclists to go down to their bicycles ready to disembark. 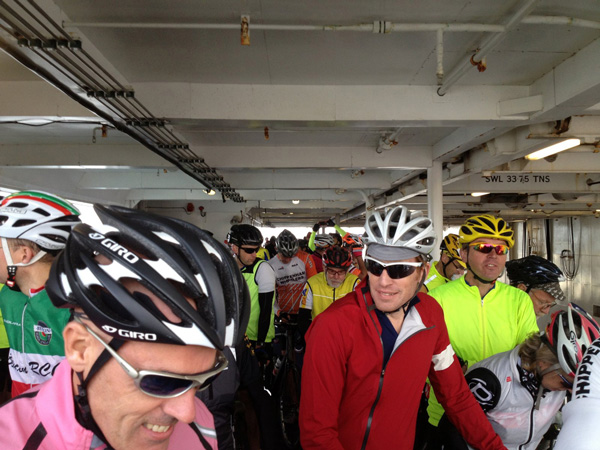 There was an air of anticipation as we waited for the ramp to lower and allow us to ride away. 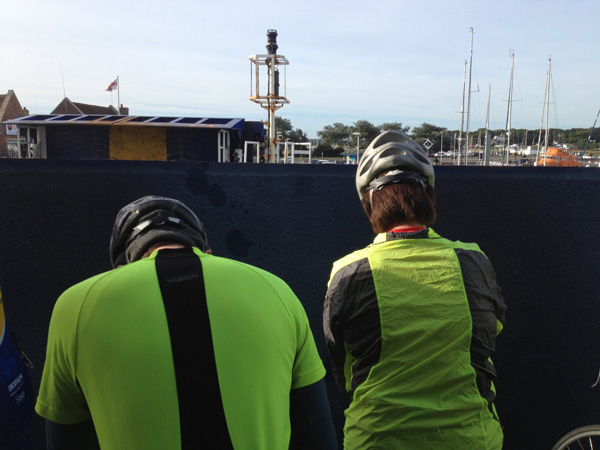 We started with a short warm up to the Needles. This was ‘undulating’ to start with and before the check point in a former gun emplacement there was a proper hill to climb. 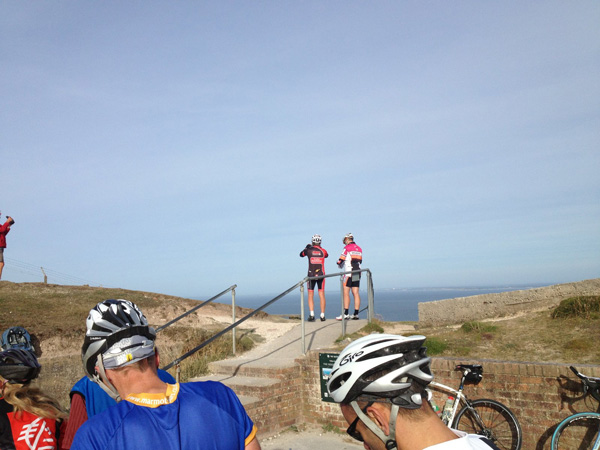 Queuing to get Brevet cards stamped at the Needles battery

We had a short rest while we waited patiently for a stamp to be stuck to the Brevet card and our name to be checked off before we continued the swoopy downhill and joined the A3055 at Freshwater.

The coast road along to Brightstone is up and down. It was a beautiful sunny morning
with great views out across the calm blue sea. It was at this point that I started to ride with Heather McKay and we found ourselves going along at similar speeds. Heather stronger on the ups and me at little bit braver on the downs. We continued to Chale where there was an information control (name that cottage – Hawthorn) before wending our way along quiet
lanes – continuously undulating (aka hilly) to the next control at roughly the half way point – The Lifeboat View cafe at Bembridge.

After some refreshment we continued – again on quiet roads to East Cowes where we arrived to find the chain ferry had just departed for West Cowes.

Waiting for the chain ferry

On the chain ferry

So we had another enforced break of about 20 minutes and used the nearby shop to top off the drinks as by now it was quite warm and we had been riding for over 3 hours. More riders arrived and there was a small group of us who completed our journey back to
Yarmouth arriving at about 12:45. Other cyclists were there waiting for the ferry to depart at 13:10 and once again there was an opportunity to load up with some calories and fluids. 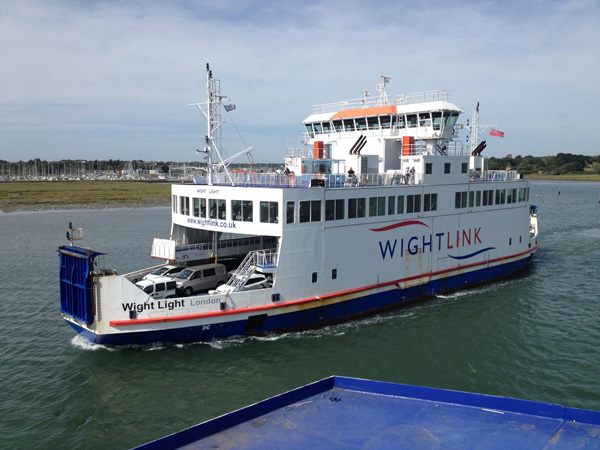 The Isle of Wight ferry 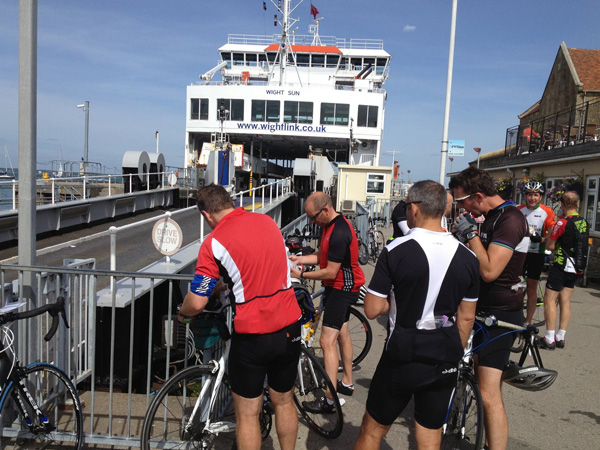 Waiting to board the ferry back to the mainland

The cruise back to Lymington was very pleasant and both the Garmin and I had a recharge of batteries ready for the next stage of the ride from Lymington, on a 103km loop around the New Forest.

The route card described the next section as gentle scenery, and very pleasant it was too. There was quite a lot of traffic on the quiet roads as this was the last Sunday of the holidays and a beautiful warm, sunny day. Drivers were generally quite patient but there is always one that is in a hurry. There were also the occasional ponies to negotiate.

The ride up through Rhinefield and Bolderwood were very pleasant although not always gentle and I soon found myself on familiar Forestman Triathlon territory at Mockbeggar before crossing the Avon and heading North West to the next control at Tidbit.

There were quite a few riders about – coming and going – leapfrogging after necessary stops for punctures, eating, photographs and comfort! Riding along chatting I completely missed the next control at 148km at Tidbit and had to extract the name of the farm (Hancocks) from another kind rider. The gentle route had a few undulations in this area which woke my legs up and it was with great relief that I finally descended into Cranborne for refreshment at the next control, the Sheaf of Arrows Public House.

The final 50 km promised to be ‘almost flat’, and they were – not entirely, of course, and there was the occasional steam engine on its return from the Great Dorset Steam Fair to negotiate, but it was quite an easy ride down to the coast at Barton on Sea where we had magnificent views across the Solent to the IOW where we had been riding 10 hours ago.

I remembered to note the Environment Agency Plant number (5044) on the Keyhaven Floodgate and was happy to disclose this to a group of guys from Fareham who had forgotten in their haste – just as I had at Tidbit.

I was glad of my GPS as the final few kilometres had many twists and turns before arriving at Lymington Community Centre – the final control at 18:20.

The finish at Lymington

There was a range of refreshments available – just right for cyclists who had just ridden 200 kilometres.

This was a great days cycling. Thanks to John Ward for organising a great event.