To end my week of visiting my roots in the North East I cycled this event on 21st September. The event is organised by David Atkinson and is based at the Swaledale Outdoor Club in Richmond, North Yorkshire.

There was a handy bench to change into my cycling gear before registering and collecting my Brevet Card. There was the usual eclectic collection of Audax riders – all male and all looking like serious, experienced cyclists.

The start in Richmond

One rider in particular looked as if he had already done a few miles and indeed he had. Steve Ralphs along with his buddy had ridden 200km through the night to get to the event and was planning on riding home again afterwards. For Steve this was an ECE – another Audax acronym, an Extended Calendar Event. This is Steve’s third 600km ride of the season and he has also ridden the 1400km LEL. (London-Edinburgh-London). Respect! (I hope you made it home Steve).

At 8am Dave set us off on our way and as usual at the first hill everyone disappeared into the distance leaving me alone in the beautiful countryside heading towards Redmire in Wensleydale. I was shortly overtaken by three riders who had started late and they passed a few kind words of encouragement as they went on their way.

As I rode through Caperby I noticed Steve and his buddy had stopped for supplies at the village shop. I expected to see them again but they were obviously pacing themselves as you would expect with another 375km to ride! Wensleydale is very beautiful with interesting scenic views at every turn. There was very little traffic and I was constantly aware of the high moors to the South and was nervously anticipating the first climb of the day over Fleet Moss.

However I had another 20km of Wensleydale to enjoy and the first control at Hardraw was a good excuse to have a little break.  The info control asked what the cycling related plaque to the left of the entrance of the Green Dragon pub said.  Which one to choose? 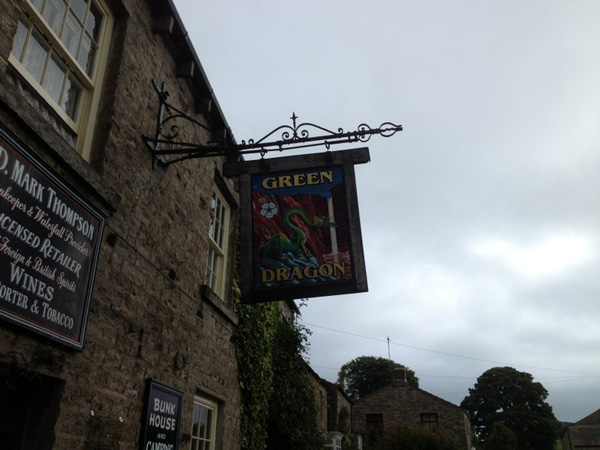 CTC plaque at the Green Dragon

I continued round crossing the River Ure riding briefly on the A684 into Hawes before turning right towards Gayle. Hawes was bustling with lots of visitors, many of them visiting the Wensleydale Creamery.

Above Gayle the Gayle Beck tumbles down like a mini Aysgarth falls.

The falls at Gayle

I had been told to expect the full view of the ascent of Fleet Moss and I had been told it get steeper towards the top. As it came into view I was quite impressed.

This is indeed a ‘proper’ hill but it didn’t look too formidable and I plodded along into the clouds at the top, receiving a round of applause from a couple of motor cyclists who were resting there after their ascent.  I was pretty warm by the time I got to the top at 589m but this soon changed.  I hopped off my bike to put my lights on and take my sunglasses off as the mist was thick and visibility poor.  It was chilly up there and I realised that if I had a mech problem at this point I would be in trouble. I pressed on over the top of Oughtershaw and soon began the descent down the Oughtershaw Road into Langstrothdale.  It was absolutely brilliant – such a lot of fun – especially when the world re-emerged out of the cloud and I began to follow the River Wharf.

As I made my solitary way down Upper Wharfedale I was reminded of everything I love about cycling. 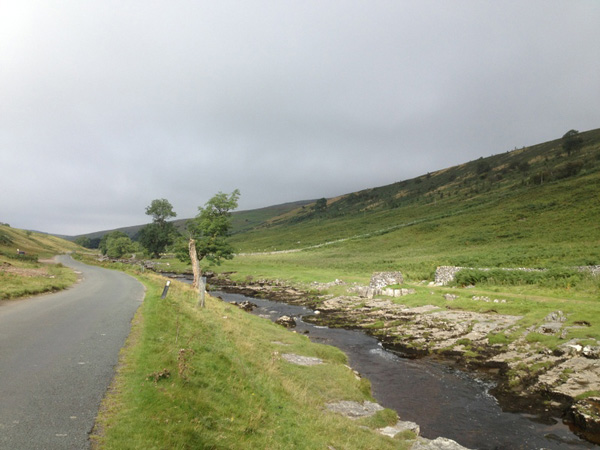 The simple pleasure of seeing the beauty of the world from my bike, knowing that it only took my effort to get to this place, and that I can stop and admire the beauty of my surroundings.  I enjoy the privilege of being fit, healthy and strong enough to be able to ride these distances on my bike and know whatever comes in front of me will be experienced to the full; hills, mountains, wind, rain, distance, cold, it doesn’t matter… I can ride anywhere letting my muscles work without engaging my brain; being able to disconnect my brain and body so that I can let my mind wander wherever it wants to go.  I have my best ideas when out on a long ride alone. I was brought back to the present by a large flock of ramblers spread across the road. I shouted ‘ding ding’ in the absence of a bell – to alert them to my presence and eased past them – sharing the road.

At Buckden I joined the B6160 – still following the River Wharf.  The road was busier now but the traffic was slow and sympathetic and there were a lot of other cyclists around – all going the opposite direction. I continued through Starbottom to the next control at Kettlewell. The village shop had a plain Bounty and the important receipt to prove my passage and I was soon on my way again for a few more kilometers before the right turn to follow the River Skirtfare up to the Arncliffe info control.

The Information control was to name the cyclist who a bench in the churchyard was dedicated to.  The bench was occupied by a cyclist on the Dales 200k who was taking a break.

I set off again down the opposite side of the scenic Skirtfare dale to rejoin the B6160 and shortly crossed the River Wharf to ride down a quiet lane on the opposite bank at Conistone.  Grassington was the next place and it was extremely busy as it was their 1940’s weekend.

At the event headquarters before starting the ride I had checked with Dave the organiser that it was OK to go directly down the B6265 towards Pately Bridge and not follow the route instructions which take a more circuitous route via Burnsall. So, at Grassington I turned left and headed out past lots of people in 1940’s dress and vintage cars towards Hebden. After Hebden the B6265 goes up and down – but mainly up! The drop down to the River Dibble and the 200m steep climb out again was a notable climb along this section. The road continued to rise steadily back up into the clouds before cresting off at 405m which was almost exactly half way round the 200km route. The descent to Pately Bridge was a lot of fun.  My Garmin was showing speeds in the upper 60’s (kph).  It was quite technical with several bends and thoughts of disc brakes entered my head.  As the road widened and flattened towards the bottom a motorcyclist who had been behind me drew level and with a chuckle told me I had been doing 43mph.  Following an older lady down a bank at such speed was obviously outside of his previous experience.

Pately Bridge is a small market town in Nidderdale. There were plenty of opportunities for refuelling and another proof of passage.  I did notice several bikes parked outside cafes and realised that at this point I was probably ahead of some of the riders who had disappeared into the distance several hours ago.  I was soon on my way again up Nidderdale passing Gouthwaite reservoir to Lofthouse where the info required the name of the house before the right turn.

Information Control…what is the house name?

I was joined here by Dave from Ambleside (this man is used to serious hills) who was on his first Audax ride and his longest ride ever.

I left the Nidd valley at 160m and set off up another proper hill. 3 kilometres of ascent and a height gain of 260m at gradients of 20%. This was a tough climb but the views down Nidderdale as I reached the top were fantastic.  Then followed the most wonderful moorland scenery – very wild and remote and all mine.  Dave had long since disappeared into the distance and I revelled in the long swooping descent to Leighton Reservoir and on to Healey. The next section to Grewelthorpe had a few cruel, steep ascents on small lanes which were hard work but I knew that the hills were very much behind me now and I could look forward to another break and refuel at Ripon which is a cathedral and market town.  I was back with the River Ure which I had left at Hawes in Wensleydale some 100km of cycling earlier.

Please try Peanut Butter Chunky Kit Kats.  They are wonderful and will probably replace plain Bountys as my cycling snack of choice!  I was very surprised to meet Aiden Healey here and realised that I must be riding quite well to be up with the experts. (either that or Aiden had got lost!). Off I went following my GPS route out of Ripon and as I crossed the River Ure I came across Dave again.  Dave was following the route from written instructions and had to keep stopping to find the way so he tagged along behind me until we found our route to Hutton Conyers.  I then urged him to carry on as I just like to cycle at my own speed.  Off he went but I soon met him again as he puzzled over the route card at Wath, a small village about 4 miles north of Ripon.

There was about 45km left to ride and Dave decided to potter along with me for the rest of the way.  This last 45km was very flat and we made faster progress whilst chatting away. I enjoyed his company and the final section of the ride just slipped away.  We successfully negotiated the route crossing the busy A1 on a bridge.  The info control at Kirby Fleetham was noted as we passed two signs of the £5 parking fine and we soon were crossing our last river of the day – back to the Swale.

We joined the B1263 for the last few kilometres into Richmond. The road rises gently into Richmond but we still had some ’go’ in our legs for this ascent and we were soon freewheeling down into Richmond at about 1810 – just over 10 hours since we left that morning . Not bad for 201k and 2745m with ascent. 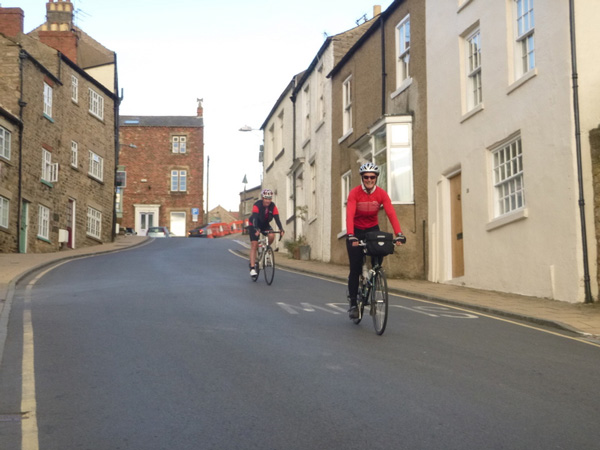 Downhill to the finish 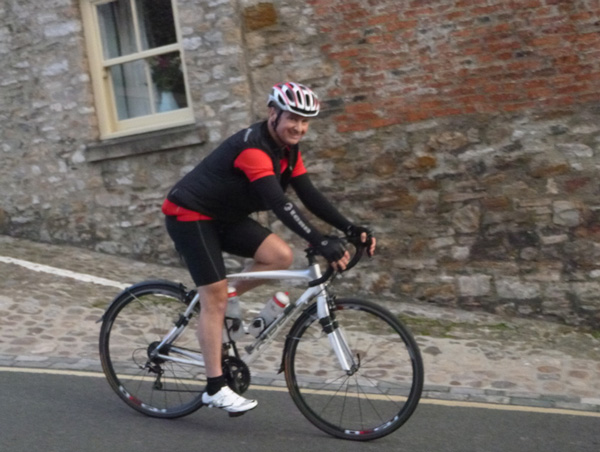 Dave at the finish

Dave Atkinson was there to welcome us back at the Swaledale Outdoor Club. 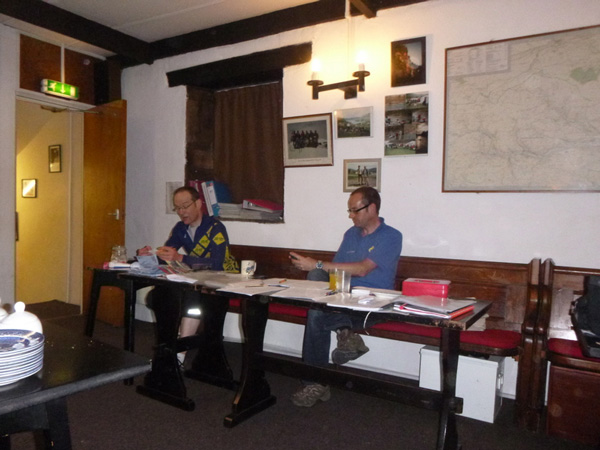 Tea and cakes were provided and were very welcome indeed.

Many thanks to Dave for organising a Grand Day Out.