The North Coast of Cornwall is fully exposed to the prevailing weather and the North Atlantic swells. It does have amazing coastal scenery with innumerable coves, inlets, caves, waterfalls, reefs, offshore islands and stacks. From the sea kayakers perspective the coast is wild and committing. The climate is warm but strong winds from the south west and the Atlantic swell are a constant concern.

The trip from Boscastle to Daymer Bay on the Camel Estuary is exceptionally scenic. The sea was calm and we knew that we could get into Port Isaac for a break en route. 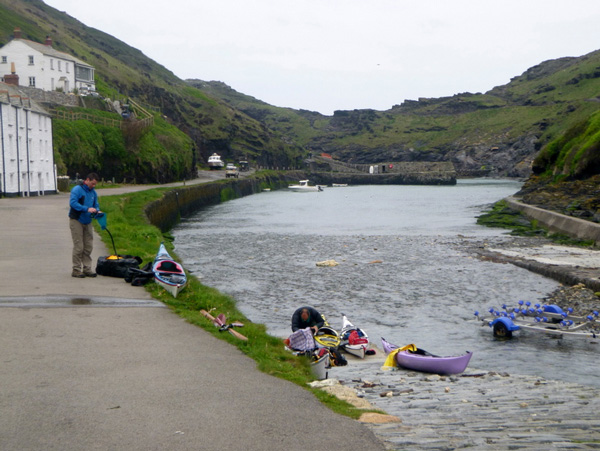 Boscastle used to be a busy port handling the ores mined hereabouts. Boscastle was flooded in 2004 but there are few signs of that now.

There are many caves to explore. 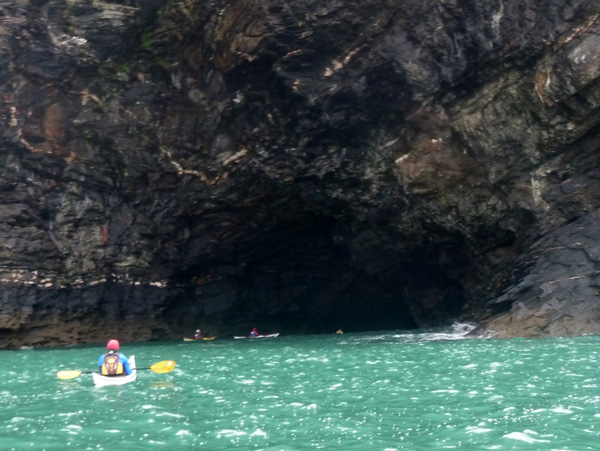 At this time of year after rainfall there is plenty of fresh water falling down the cliffs making spectacular waterfalls.

There are many spectacular rock formations – this is Ladies Window.

Tintagel Head with the vast King Arthur Castle Hotel on the top of the cliff is a notable landmark. 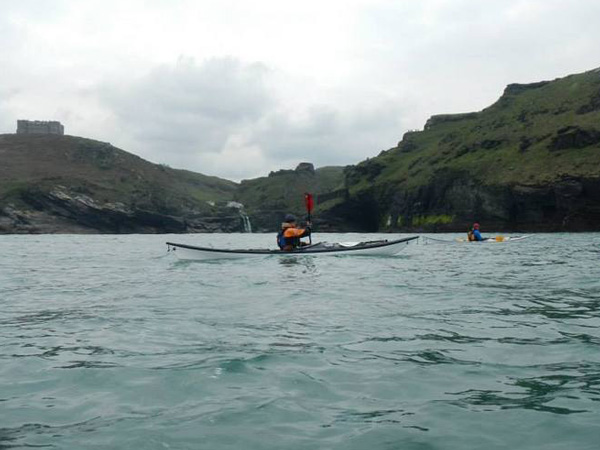 The headland has seen a millennia of occupation and the remnants of the past can be clearly seen. Tintagel has historical importance and pottery from the sixth century has been found here. However, many visitors today are interested in the Arthurian associations. It’s always busy and very nice to view it from the sea without becoming embroiled too closely in the tourism.

We paddled on down the coast passing between Gull Rock and Trebarwith Strand.

Trebarwith was a busy quarry port before the tourists came. Another 8km of cliffs to paddle along before reaching Port Isaac.

Port Isaac is a fishing village. The drama Doc Martin is filmed here. In Tudor times it was a pilchard fishing port. The inshore lifeboat is housed inside the old fish cellars.

Port Isaac was busy with visitors. We had a welcome break from the kayaks and feasted on pasties, ice cream and tea.

We still had a long way to go so we paddled straight across Port Quin Bay. On a more leisurely paddle there is plenty to explore along the coast here. However we made a beeline for The Mouls which is an offshore island at The Rumps headland. There were plenty of Auks (Puffins live here) at the Mouls and the tide was running quite hard which made for an interesting few minutes as we rounded the island and headed for the Rumps.

Rumps point is the site of Cornwall’s finest Iron Age cliff castle and from the water we could clearly see ramparts and ditches constructed to keep out unwelcome boarders.

We continued under massive, impressive cliffs to Pentire Point where once again we encountered some tidal movement but with so little swell this was not a problem and we headed into Padstow Bay for the last few kilometres before reaching our get out at Daymer Bay.

I first slept out under the stars back in June 1975 on Carnedd Llewelyn.

Sleeping out on Carnedd Llewelyn in June 1975

I was on a course at Plas y Brenin and we slept out on the mountain during a little expedition.

Since then I have slept under the stars on many occasions all over the world. These days we have elective sleep outs when the fancy takes us. The weather was very good last week so we took ourselves all of 5 minutes walk from our house and slept out on the cliffs.

The main criteria for an elective sleepout is the weather. No rain on the forecast is good and together with light winds and mild temperatures – a comfortable night can be expected.

The location should be safe – away from the top and bottom of cliffs and encroaching water. It’s also good to avoid animals. Other things to avoid are long grass or ripe crops – just in case the farmer starts to harvest before you wake in the morning. (Yes, this has happened to us!)

It was a clear night and at about 10pm the Flower Moon rose in the East.

Despite the moon it was very dark.

It got quite cold and damp, despite there being no rain. Light appeared in the sky at 05:00.

By 07:30 the first dog walkers were appearing so we picked up our sleeping bags and wandered off home for breakfast.

Time to get up and go home for breakfast, all of 5 minutes away! 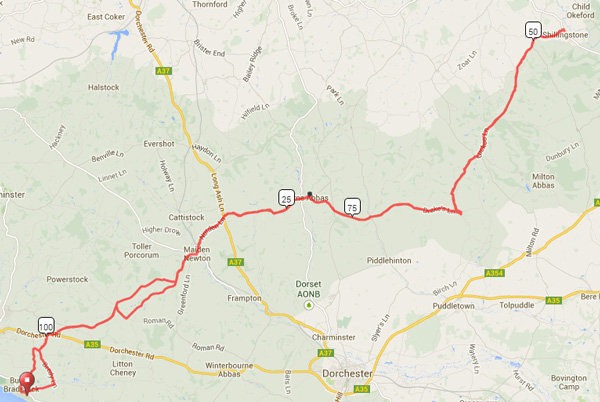 There are many targets and challenges in Audax, but I have been working towards AAARTY for the last 12 months. To obtain this award, you ride an AAA event in each of 12 consecutive calendar months. Audax events which attract altitude points are hilly – very hilly.

So today’s ride was 100k with 2000m of ascent. Living at sea level in West Dorset it’s quite easy to find a hilly route. There are no flat routes. There is a certain neatness to riding from home in a North Easterly straightline for 51 kilometres. This brings me to Shillingstone – I then turn round and ride back again. This ride has 10 proper hills. It is extremely scenic and on quiet roads. I did this ride in January and I found it very tough.
END_OF_DOCUMENT_TOKEN_TO_BE_REPLACED

The Old Roads is a BRM event run under Audax UK regulations by Ian Hennessey It starts and finishes at Honiton. It took place on Saturday 10th May 2014.

I entered this event as my first 300km ride because it is close to home. The route by Audax standards is straightforward and it is relatively flat with only 3677m (by my GPS) a mere 12,000 feet of ascent.
END_OF_DOCUMENT_TOKEN_TO_BE_REPLACED