My main event this year is Challenge Weymouth. This is a long distance triathlon and will be the official European Triathlon Union Long Distance Championships. The event takes place on Sunday September 13.

In its most common form, the modern triathlon consists of swimming, cycling, and running in consecutive order. The participants’ times also include the “transition” times between each event. The multisport race format is designed to test the endurance of its participants, much more so than swimming, cycling, or running alone.

The distances involved in the long distance triathlon are: Swim 2.4 miles (3.8km) bike 112 miles (180km ) and run a full marathon of 26.2 miles (42.195km). The term ironman is commonly used to describe an event of this length. Strictly speaking an Ironman is produced, owned, or licensed by the World Triathlon Corporation. There are races of the same distance which aren’t produced by the WTC.  However all long distance triathlons are often referred to as an ironman.

I swam competitively as a child so my basic front crawl technique was sound when I started training in September 2014. I received some technique coaching at ‘swimfit’ classes at Bridport Leisure Centre.

Over the winter I built up my endurance in the pool until I could slog out 160 lengths or 4 km. This is mind blowingly boring so I found some ironman training sessions online to build up swim strength stamina and technique through drills.

I am fortunate to live a few hundred yards from the sea. I do not relish cold water so it wasn’t until the end of May that I actually got into the sea. 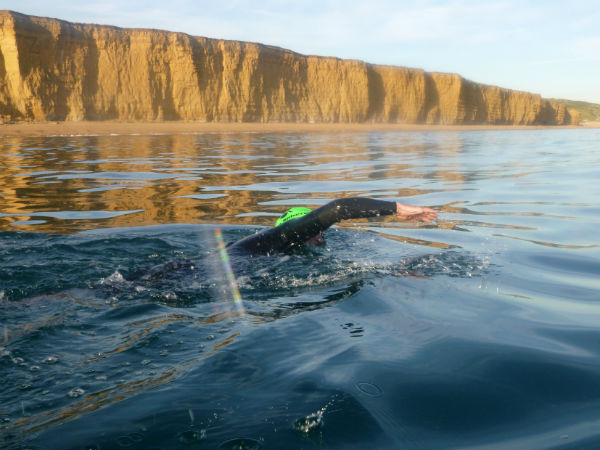 In the sea at last

It was still absolutely freezing cold at about 11 degrees. A 40 minute sea swim left me very cold with poor coordination and I was apparently incoherent (what’s new?). 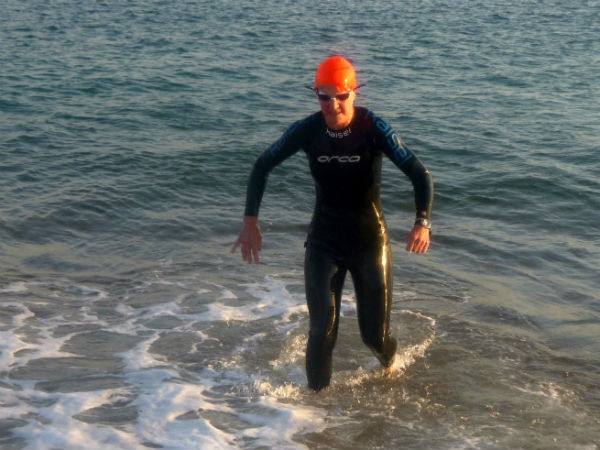 I soldiered on in my old wetsuit into June. As soon as I tried to extend my time in the water beyond 40 minutes I got mildly hypothermic. I needed a warmer wetsuit so I visited specialist triathlon outlets and took their advice and tried on several brands of wetsuits but none of them fitted. The advice I had had in triathlon shops was to have the suit as tight as possible whilst not restricting the shoulders. It should be a big effort to get the suit on. The tightly fitting suits still had ‘pockets’ where water gathered and when I tried swimming they were too tight around the shoulders.

One of my friends has a made to measure suit so I had a chat with Malcolm at Snuggs and discussed my requirements for a custom made wetsuit. I ordered a Triathlon Stealth wetsuit with extra thermal lining on the core. There was no need to go down to Newquay to be measured. The Snuggs website has a video giving instructions on how to take the measurements and a comprehensive list of which bits to measure – the ‘Tailors Guide’. The only drawback was that it would take another 4 weeks to get the suit. I wish I had come to the decision earlier in the season that I need to go down the custom made route.

Meanwhile, I took part in two Aquathlons at Weymouth organised by Bustinskin. The water in Weymouth Bay is warmer than Lyme Bay as it is shallower and more sheltered. The swim is only one kilometre which takes me about 20 minutes . It was good practice to swim in a competitive field and also to follow the course practicing ‘sighting’. The ‘transition’ was also good practice as was having to run 5km quickly.

By the end of June the sea had reached a balmy 13 degrees and I was getting more acclimatised.

Rescue was at hand.

I managed a 3km swim but was very cold and crampy by the end and much slower than in the pool. In early July I managed a couple more 3km sea swims but got very cold. There was no way I could get on my bike and ride 112 miles.

We were assured they are harmless but I feared swimming into one. I do not like to see anything living when I am swimming. I like a nice smooth, sandy sea bed with no rocks or weed. I definitely think that anything living in the sea is out to get me and prefer not to know it is there.

Being ‘followed’ by a shoal of mackerel

On 16th July my Snuggs wetsuit arrived. I tried it on. It went on very easily compared to the off the peg suits I had tried. The Snuggs suit fitted beautifully. But the real test was in the sea. My first swim was 2km. The suit felt good. I swam well. I wasn’t cold. The next swim was 3.5km which took almost 2 hours against a weak tidal flow. Still not cold. I gained confidence in the sea in the Snuggs suit and it was lovely to be able to finish a swim feeling normal and able to function. That 112 mile bike ride was becoming a possibility.

On 1st August I did my longest swim ever. This was from Charmouth to Seatown taking in Golden Cap 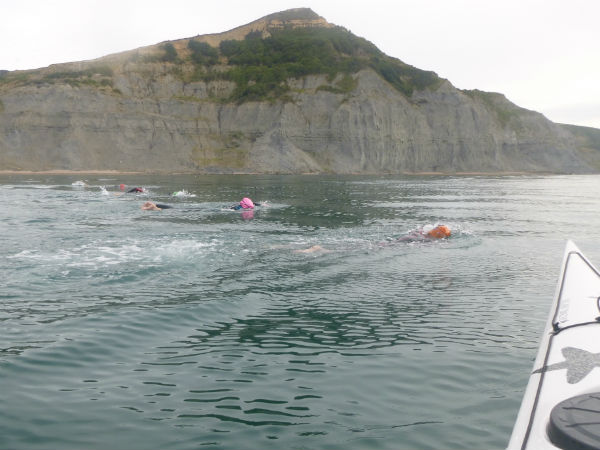 the highest cliff on the south coast of Great Britain. I swam with some friends. I also swam with barrel jellyfish. 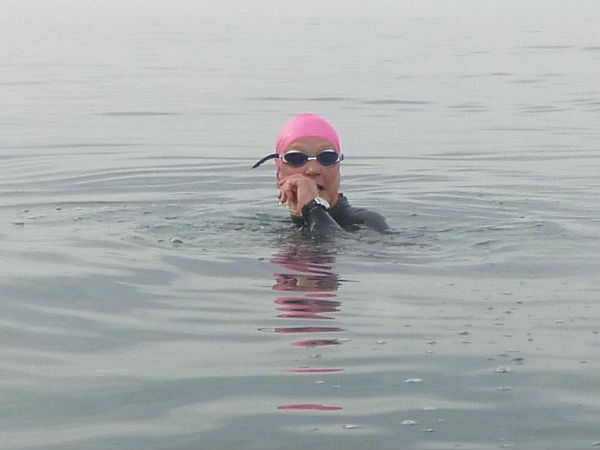 There are massive barrel Jellyfish down there.

I came across them every hundred metres or so but they were quite deep below me. I gradually screamed less each time I saw one but was still grateful for the close proximity of my husband Ian in his sea kayak. The new suit and consistent swim training was beginning to pay off as I wasn’t cold or particularly fatigued from this swim.

Most of my long swims are with a group of friends 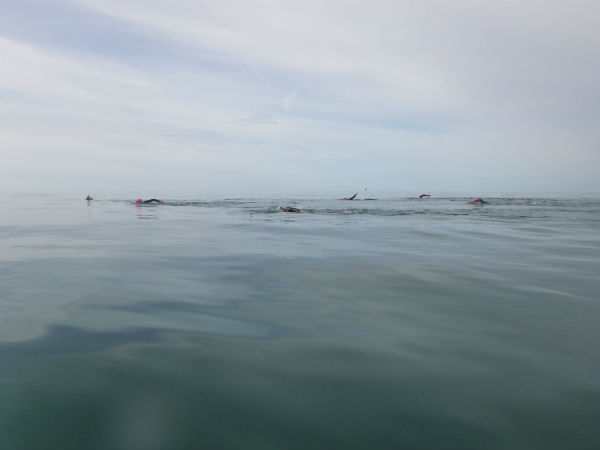 and we all look out for each other and re-group regularly. 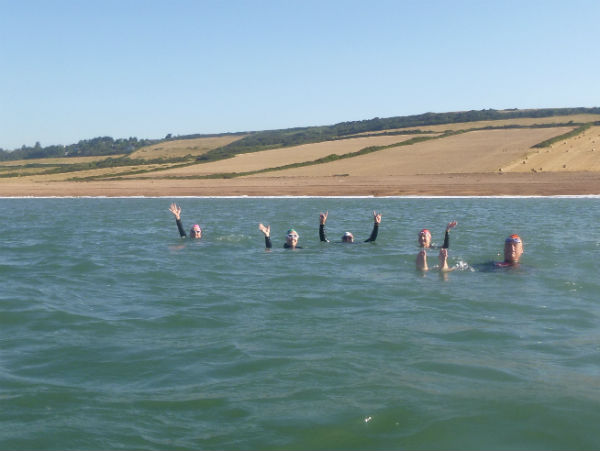 On long group swims Ian accompanies us in his sea kayak.

This enhances the safety of the swim and it also enables us to be fed and watered. Lucozade and jelly babies seems to be favourite. On my shorter solo swims Ian walks along the beach with a throw line and on longer swims he comes in his kayak. I will not swim entirely alone.

I have continued to get in the sea and swim 3 to 4 kilometres regularly. Conditions need to be quite smooth to swim off Burton Bradstock beach as it shelves very deeply into the sea and with any swell at all a forceful dumping wave is produced making swimming unsafe. 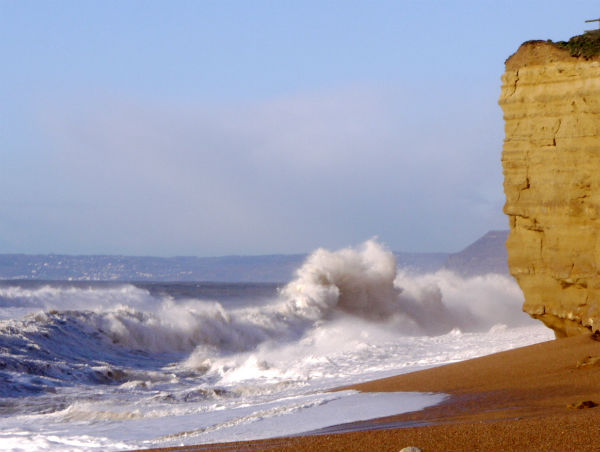 NOT a swimming day.

With just 3 weeks to go before Challenge Weymouth I would like to do a couple more 4km sea swims just to build my confidence but deep down I know there is very little to gain now and the main thing is to stay healthy and injury free. The water in Weymouth Bay is now just over 16 degrees. We must hope for nice smooth conditions on 13th September which will enable us to enjoy the swim component of the ironman and emerge from T1 with enough energy for the 112 mile bike ride.

Jelly fish or not…still a great place to swim.