Nepal is well known as a great destination for enjoying the beauty of the mountains through trekking. The diversity in Nepal’s nature and a range of exotic cultures makes Nepal ideal for trekking. The paths into the interior of the country follow ancient footpaths which wander through scenic river valleys passing intricate terraced field systems and along forested ridges connecting picturesque hamlets and mountain villages. The highly developed well defined trails have been used for centuries.

We had travelled to Pokhara by mini bus and had enjoyed a peaceful day of rest and recreation in the town beside Phewa Tal.

On 3rd November our group of 12 left Pokhara at 06:30 in pouring rain and journeyed into the Annapurna district by mini bus. The road out of Pokhara was mostly of a hard surface but became increasingly rough as we closed on our destination – Birethani (1025m). The road does not actually end here but we had decided on balance that it was better to continue on foot from there. Birethani is also where the Annapurna Conservation Area office is. Everyone needs an entry permit.

We were travelling in a group organised by Lost Earth Adventures. Our group was led by Richard Goodey assisted by Nepalese trekking guide Bhairus. Our luggage was carried by four porters – Ram, Raju and Ganesh who were 22 years old and Binod who was 27. The porters packs were around 25kg. 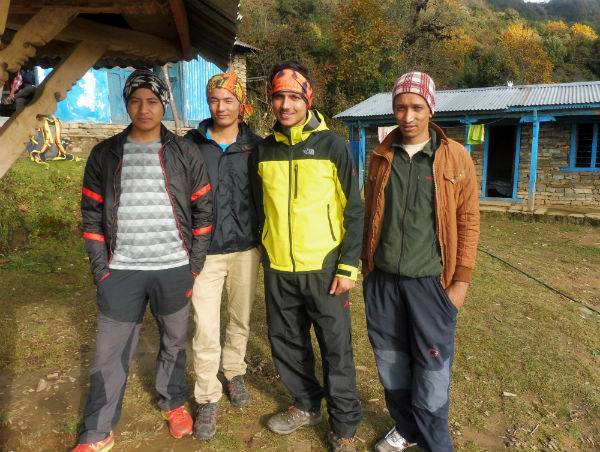 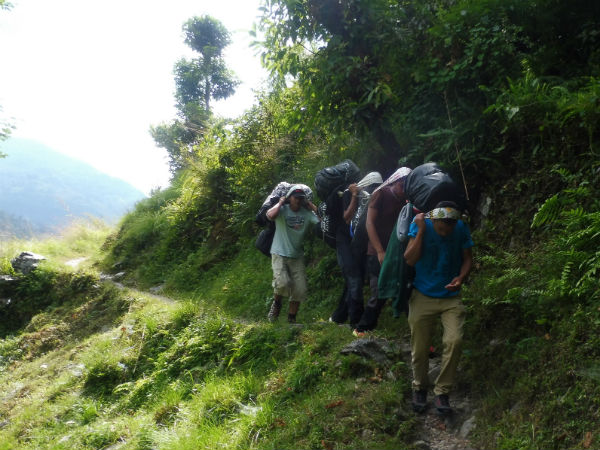 We stopped for breakfast in Birethani – milk coffee, omelettes and pancakes.

The first part of our trek was to go to Mardi Himal base camp. The Mardi Himal trek visits a quieter area in the Annapurna region.

As we started to walk the rain eased and it became quite hot. We strolled up the road – with the occasional truck and school bus trundling past and reached Syauli Bazar (1220m) where we stopped for lemon tea. Unfortunately we had no views of the high mountains as it was too cloudy. The immediate valley scenery was interesting though with subsistence agriculture much in evidence. We walked on gradually gaining height and stopped at Kimche (1640m) for lunch.
After lunch we had our first wobbly bridge.

It was quite sturdy so not too scary a crossing of the raging Modi Khola far below. We then began our first ascent of steps. The trail is well constructed as it is the only means that local people who live here permanently have to get about. Our destination for the day was the scenic village of Landruk (1565m) from where we had spectacular views down into the valley.

The tea house we were staying at had a terrace of twin en-suite rooms (though the shower was a cold dribble) and a communal dining room. Throughout the trek we stayed at family run ‘tea houses’. By staying in tea houses we were contributing to the local economy of the Annapurna Conservation Area. Richard had previously been a chef and as a result of this we ate well throughout our time in the mountains with plenty of fresh food.

Wednesday 4th November dawned with a clear blue sky and our first amazing view of Annapurna South and Machhapuchhre.

We left Landruk at around 8am and walked up along the ancient footpath through the village into the forest consisting mainly of rhododendron and oak. The trail ascended relentlessly with good views emerging occasionally of Annapurna through the trees.

We emerged into a clearing at 2600m where there were 3 lodges. The views across to the other side of the Modi Khola far below were far reaching. 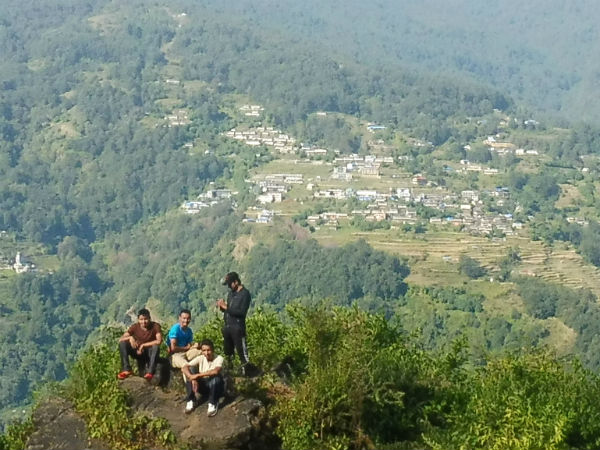 We sat outside in the sun to start with but the clouds quickly gathered and by the time I had finished my first Dal Bhat lunch it had started to rain – heavily. 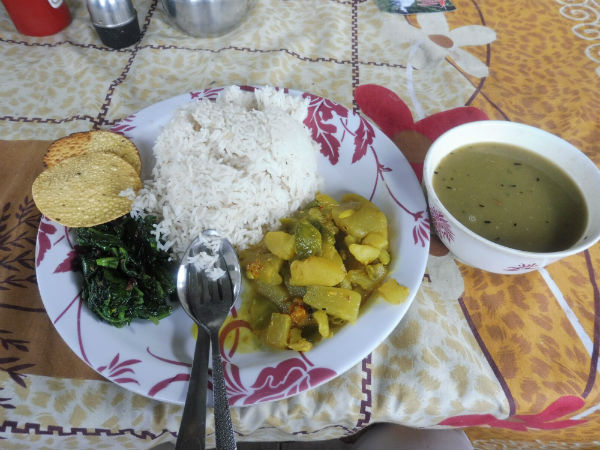 Dal Bhat…the first of many.

It didn’t look like it was going to stop anytime soon so we put on our waterproofs and headed up the trail into the dripping forest. It stopped after about half an hour so off came all the soggy gear.

Time to shed the waterproofs

We continued to slog uphill in the dripping forest for what felt like hours. It was quite cold and there were patches of snow. The increasing altitude was beginning to have an effect on the lowland Brits.

Low Camp has two very basic lodges with a very basic dining room (and an even more basic lavatory) We had no view as the cloud was low and we all huddled around the oil drum fire for warmth and comfort. We were all feeling slightly unwell and nursing ‘altitude’ headaches. The accommodation was very basic with earth floor and no electricity. We were all in bed by 20:30!

Hurrah the clouds have gone and we have even more wonderful views of Annapurna South and Machhapuchhre or Fishtail. The mountain is revered by the locals and is sacred to the god Shiva. It is off limits for climbing (not that we fancied it you understand).

The walk up to High Camp was all in cloud and it was quite cold. The ridge is called ‘cloudy ridge. There was a newly built tea house called ‘Lucky View’ where we stopped for lemon tea. Not lucky in our case as all we could see was cloud. Shortly after the tea house we broke out of the tree line. At this point we had been expecting a good view of Annapurna and Hiunchuli. No luck! The trail continued along the Mardi Himal Ridge mainly on grass with some rhododendron bushes along the way.

We arrived at High Camp (3600m) at around 13:00. The rooms were very basic with earth floors and walls that did not meet the roof so it was very draughty. The dining room was still under construction. The wood shavings piled on the floor made good fuel for the fire (accentuate the positive!). It was very chilly despite the fire so it was on with the down jackets, hats and gloves. We sat around and tried to read and play cards through our high altitude headaches and the day passed. It rained and snowed outside and we were encased in freezing cloud.

One huge advantage of trekking with Lost Earth co-founder Richard Goodey is that he has the experience and confidence to adapt the trek to the wishes of the group. After discussion we were all in agreement that if it was still cloudy in the morning we would go down without having seen the view. However, Plan A was to get up before dawn and trek up along the Mardi Himal ridge passing through a series of view points and keep moving up to the Mardi Himal base camp. Sleeping was not good due to the cold and high altitude.

During the night all the clouds disappeared and the sky was clear and bright with billions of stars. Two of our group left High Camp at 05:00 with Bhairus, our Nepalese guide, and set off for Mardi Himal Base Camp. The rest of us left an hour later with Richard and Binod. The first view point at around 4000m was reached in 45 minutes and we got there at first light. 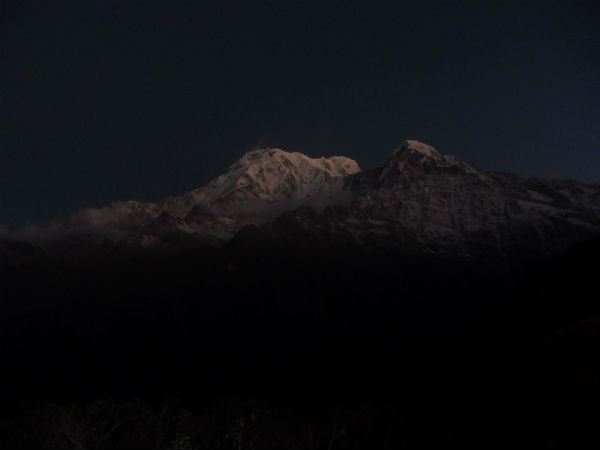 All the slog in the cloud yesterday was forgotten as we marvelled at the amazing mountain views of Annapurna and Hiunchuli. 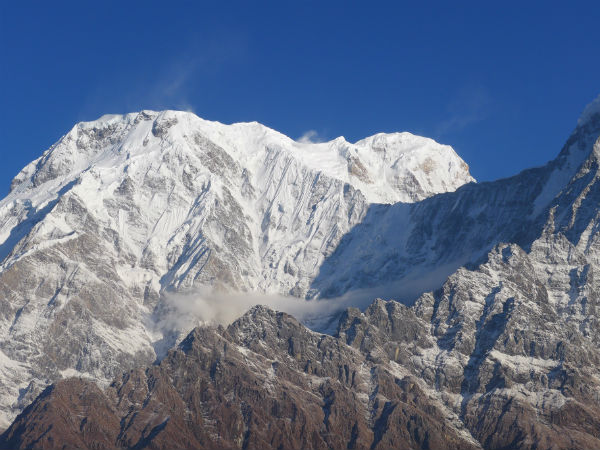 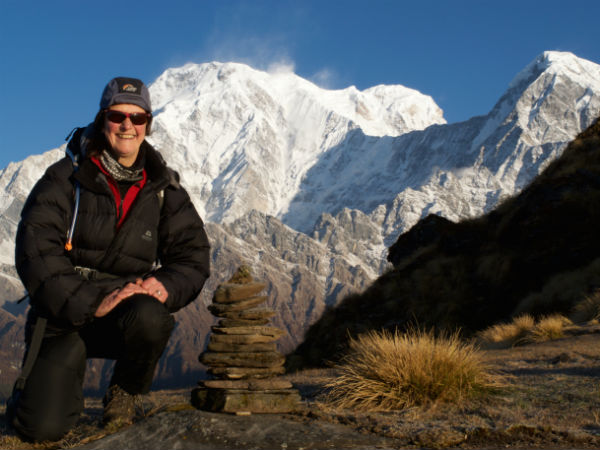 For some that was far enough and they stayed at the first view point but a couple of us carried on further up the ridge for an hour or so with Richard and Binod. It stayed clear and bright but very cold. We stayed up there for an hour or so soaking up the amazing scenery

On the way down we followed an intermittent path along the back of the ridge. I got separated from the others as I decided to contour round rather than descend and then have to climb back up. While negotiating my way through an area of cliffs I disturbed a Mountain Lion. It was black with purplish markings and the size of a Labrador. Fortunately it was scared and ran away from me at speed – taking a tumble down the cliffs. I didn’t really see it but Richard and Binod got a good view and were very excited as it is very rare.

By 10am the clouds were back down and all the views were gone for another day. The group were all back at High Camp and ready to go down. We had a great group picture before leaving.

The descent was quick as we were all eager to get down to warmth and more oxygen. We had another great wildlife treat when two massive vultures circled us.

We kept walking through Lucky View tea house and when we reached Low Camp we decided not to have lunch there. Instead we took orders for lunch and Bhairus phoned them through to Forest Camp so when we arrived there an hour or so later lunch was almost ready. Egg and chips all round! We appreciated the warmth and luxury of Forest Camp after the more rustic amenities of Low Camp and High Camp. We were enjoying it so much that we stayed the night and had a decent sleep in a warm room – with a proper floor!