There are many challenges to be tempted by when riding Audax. However, a lot of them involve riding for a very long way and for a very long time. At present I do not find it fun to be out for more than about 12 hours, so I am limited to 200km rides or less.

I have found that one challenge I can maintain and use to keep up my cycling motivation is AAARTY. (Audax Altitude Award Round The Year). This involves riding a minimum of 50km with at least 750m of elevation every month. I have ridden a hilly ride every month since June 2013 so this was my 36th consecutive month!

Occasionally I will ride a hilly Calendar Event like the Dorset Coast 200km in April 2016 which attracted 2.75 AAA points with a total climb of 2850 metres. But usually I ride a 100km DIY with over 1500m of elevation. Living in the West of West Dorset it is not difficult to plan hilly enough rides from my back yard.

For Audax DIY planning purposes Burton Bradstock to Shillingstone is a very convenient 51km with 1015m of elevation. The return trip makes for a very neat 102km with only the one intermediary control necessary. Perfect.

The second week in May the weather warmed up nicely and I set off to meet my cycling buddy Jo ready for a hilly 100km. 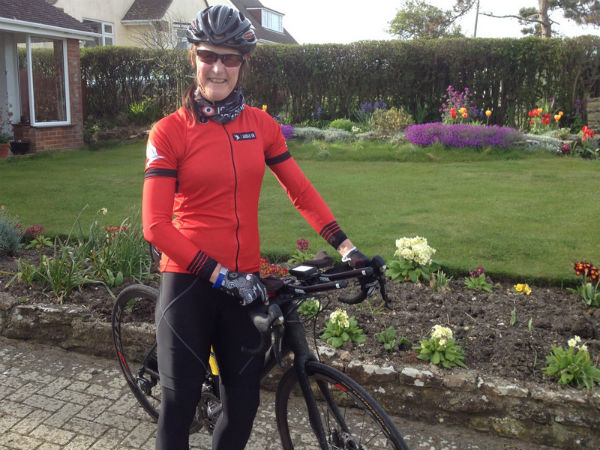 Setting out from home – nice jersey!

Living at sea level the only way is up. The first proper hill on the route is the Eggardon Hill Fort which is 3km long and an elevation gain of 190m with an average grade of 6.3%. These statistics do not tell you that there are some very steep bits along the way. Then after losing most of that elevation on the descent to Maiden Newton, the route then climbs to the A37 before dropping down again to the ford at Sydling St Nicholas. Once again an immediate steep climb up and then drop down to Cerne Abbas.

Ignoring the Abbots Tea Rooms but promising ourselves lunch on the return trip, we tackled the next climb up Piddle Lane. The top of this advertises itself as 17% – and it is quite a tug. Then follows a lovely descent into the Piddle Valley. It was a beautiful warm day and we enjoyed the sounds and smells of spring, emerging on the undulating lane across to Cheselbourne. The gentle bumps continue through Melcombe Bingham and Ansty before the climb to Bulbarrow begins in earnest.

The bluebell woods on Bulbarrow were the reason for choosing this particular hilly 100km route and we were not disappointed.

It was a really clear day and there were fabulous views down into the Blackmore Vale. The descent is steep (mental note that we turn round and come back the same way!) to begin with, before a few undulations to Okeford Fitzpaine and then the last few kilometres to Shillingstone complete part one of the ride – all safely recorded on the Garmin.

We ate our stocks of bananas and flapjack at Shillingstone before turning round and working our way slowly back up Bulbarrow. There was more time to appreciate the wonderful views on the ascent from this side! We had a good long rest on the more gentle descent which apart from a few little lumps continues all the way down to Cheselbourne. That undulating lane back to the Piddle valley– although still very pretty – had become a whole lot hillier on the return and our legs were feeling quite used as we faced the climb out of the Piddle Valley. We were now counting down the hills and once we had conquered this one we only had 3 left. We also had that promised lunch in the cafe at Cerne Abbas.

17%…Steep (but downhill on the return trip 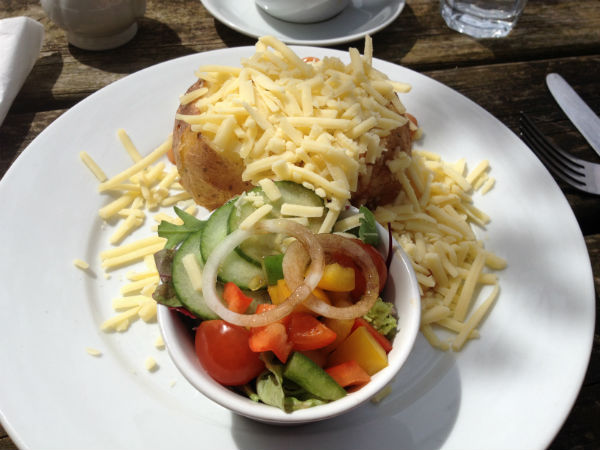 Suitably fortified from an excellent lunch we breezed up the hill out of Cerne and back down to the ford at Sydling. The climb up to the A37 from the ford is quite long but we made it and enjoyed the freewheel down to Maiden Newton. The 10th climb of the day back over Eggardon was the last challenge of the route. It is a long climb whichever way you go and with 80km and 1700m already in our legs it was quite hard work.

My ‘boss’, Audax DIY organiser for the South West Tony Hull, reckons that 20m of climb per kilometre is the Gold Standard so I was very pleased to have achieved that to compete my 3rd year of AAARTY.

Elevation profile of the ride