Sardinia is part of Italy and is the second largest island in the Mediterranean (Sicily is the largest). It has an area of 9,000 square miles making it a little larger than Wales. However, the population of Sardinia is 1.5 million which is half that of Wales. Wales has plenty of open spaces – Sardinia is empty.

The coasts of Sardinia (1,849 kilometres long) are generally high and rocky, with long, relatively straight stretches of coastline, many outstanding headlands, a few wide, deep bays, rias, and many inlets. There are various smaller islands off the coast.

Sardinia, unlike mainland Italy, is not earthquake prone which we were pleased about as Italy has suffered an unusual amount of seismic activity in 2016. Away from the sea the island is quite mountainous. The highest peak is Punta La Marmora at 1834m. Sardinia has few major rivers. There are 54 artificial lakes and dams which supply water and electricity and there is just one natural fresh water lake.

The island has a Mediterranean climate along the coastal plains and lower hills and a continental climate in the mountainous interior.

The island has a long and intriguing history, and is dotted with interesting archaeological sites. In the Bronze Age the island was populated by an enigmatic people who built nuraghi – stone towers – across the island, along with palaces, sacred wells and other structures. Many remain, as ruins, and the importance of these sites is recognised with a UNESCO World Heritage listing.

As Sardinia is on Mediterranean trading routes, various subsequent civilisations colonised or conquered the coastal areas, including the Phoenicians, Romans and Byzantines. Later the island was for some time under Spanish domination. A version of Catalan is still spoken in Alghero. The mountains inland, difficult to conquer and offering little to invaders, have a reputation as untouched pockets of ancient culture and tradition.

Taken as a whole, Sardinia’s economic conditions are such that the island is in the best position among Italian regions located south of Rome. The Sardinian economy is, however, constrained due to the high costs of the transportation of goods and electricity, which is twice that of the continental Italian regions, and triple that of the EU average.

The economy is centred on service industries such as hotels, restaurants, transport and telecommunications. The traditional industries of farming and fishing now make a relatively small contribution to the economy.

There are still a few goats and sheep around

Today all Sardinia’s major urban centres are located near the coasts, because of seaside tourism, while the island’s interior is very sparsely populated. The main centre of population is Cagliari in the south where 25% of Sardes live.

The island has many beaches and stretches of coast which are largely unspoiled and plenty of down-to-earth towns and resorts. Lagoon, island and mountain habitats all feature among the region’s nature reserves.

One of the many beaches. This one had some low key development.

It seems that Sardinia is a very popular destination for mainland Italians but they all come in August. Compared to other Mediterranean Islands, outside of August Sardinia is quiet.

We do not like crowds or cities so Sardinia seemed like a good choice for us. We decided to travel in September and planned a mix of mountain walks, sea kayaking, and some sightseeing. We avoided the cities and the glitzy Costa Smeralda.

There are no motorways on Sardinia but dual carriageways connect the main cities and the roads are quiet. However, once away from the main roads we had some interesting road trips especially on the steep, narrow, twisting mountain roads.

Some of the roads in the mountains were quite interesting!

From Oblia airport we headed straight for the mountains. We spent a couple of days walking in the Ulassai area characterised by massive limestone cliffs. There were no other tourists here and in the 3 days we were out in the mountains the only people we met were two German tourists on mountain bikes.

We stopped off for a walk up Perda Liana as we travelled North to the Gennargentu.

A lovely walk around Perda Liana.

In the Gennargentu area we stayed at Fonni for a few days. We experienced some cool weather there and some spectacular thunderstorms. We also quickly found out that there were no other tourists, no one speaks English and it is impossible to buy a postcard. The only food we could find was pizza.

Fonni is the highest town in Sardinia at 1000m. Surprisingly Fonni is a winter sports centre with a ski lift to Monte Spada and Bruncu Spina. There are also some paved access roads to the rather limited skiing infrastructure which we were able use.

We did not come across any other tourists while we were there and did not meet any other people walking in the mountains. Our B&B provided cake for breakfast and some local unleavened bread which we found inedible. They didn’t speak any English and our Italian is not up to much so we made no progress on what we would prefer to eat at breakfast. We resorted to fortifying ourselves with Birra Ichnusa, the popular Sardinian-made beer; at 70 cents a can we found no reason to limit our consumption. We had to get our calories from somewhere.

The highest peak is Punta La Marmora (Perdas Carpìas in Sardinian language) at 1834m was an obvious target. Unfortunately we had some mist when we were approaching the summit.

But it improved while we were up there…

…to give us far reaching views which clearly show the emptiness of inland Sardinia.

The view from Punta La Marmora

We left the mountains and drove to the North East of the Island close to Alghero and joined Sea Kayak Sardinia for a few days paddling.

The weather was very windy while we were there and we had joined a ‘no experience necessary’ group so although we were quite limited in where we could go we still enjoyed some excellent paddling on the spectacular coast.

Lunch break on the Sardinian coast

After a few days near Alghero we travelled the length of the island and explored the South West Coast .

We visited the famous Cala Domestica – once a port built to export minerals from local mining. There is some spectacular cliff scenery here and some low key tourist infrastructure. In September there were very few tourists – and no other Brits. 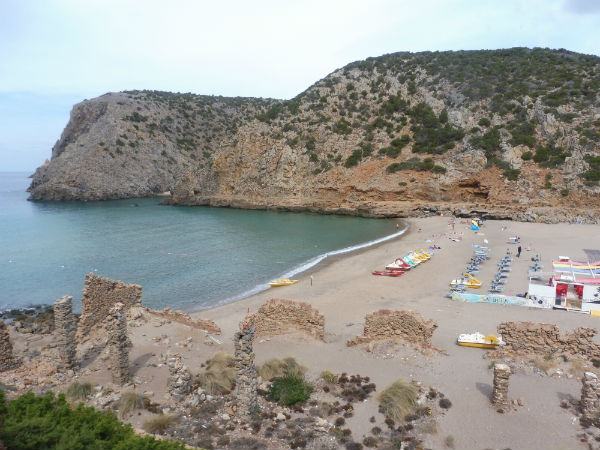 We continued to the Island of San Antioco. We took the ferry to San Pietro and suffering from withdrawal symptoms we hired some bikes and took a spin around this remarkably unspoilt island.

San Antioco had other hidden joys including our very own cove. This beautiful rocky bay was a few minutes’ walk from our Hotel at which we enjoyed for a day. 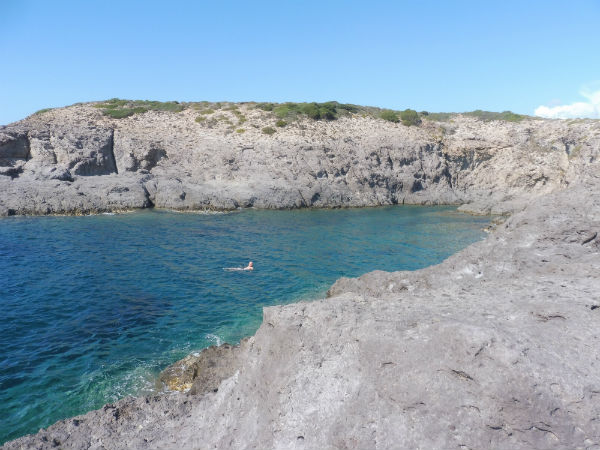 ‘Our cove’ on San Antioco

Reluctant to leave this idyll and promising ourselves we will return we headed up the coast to Cala Gonone. Until recently this beautiful area was only accessible by boat. It has become quite a busy little resort and we were pleased to be staying up in the mountains.

Gola di Gorruppu, Sardinias most spectacular gorge, was close at hand so we decided to explore. We parked about 15km up the Rio Flumineddu from Dorgali. We then had a scenic two hour walk along a marked trail with interesting ever changing views. At the mouth of the gorge we were surprised to find an entrance booth and a rudimentary explanation about the gorge – in English. (We also had to pay 5 euro each). This was the biggest concentration of tourists we had seen in the three weeks we had been in Sardinia.

The gorge is flanked by limestone walls towering up to 400m in height. After 500m you reach the narrowest point, just 4m wide, and the formidable Hotel Supramonte, a tough 8b multipitch climb up a vertical 400m rock face.

This is me NOT on the Hotel Supramonte

The next day we were back at the airport, rather sad to leave after a very successful exploration of the Island. It is a wonderful place with so much to see and do. We loved the emptiness of it all and the lack of other tourists.