In July 2017 Dorset Police launched Operation Close Pass. This scheme is adopted from a scheme run by West Midlands Police and similar schemes are being rolled out in most parts of the UK. The initiative is designed to improve the safety of cyclists and to raise awareness among all road users on how to behave courteously to each other.

In the last 2 years 3 cyclists have been killed on Dorset roads and a further 133 seriously injured and 144 slightly injured.

Close passes are a regular occurrence for all regular cyclists. Such dangerous manoeuvres are rarely done from a position of malice by the driver, but from ignorance. The Operation Close Pass aims not only to protect cyclists but to educate drivers to be more considerate road users, benefitting everyone using the roads.

At times drivers may feel frustrated and inconvenienced by cyclists and fail to understand that cyclists share the road with drivers and are equals with drivers on the road. All road users have equal rights to use the highway safely.

Operation Close Pass is trying to educate drivers to overtake a cyclist in the same way that you would overtake a car. Give cyclists at least 1.5m clearance in slow moving traffic. At higher speed or in bad weather a full cars width is recommended.

There is much that cyclists can do to improve the safety of themselves and other road users. The roads would be much safer if we were all thoughtful and considerate of each other’s situation and treated each other with kindness, tolerance and courtesy. Patience is important. Good behaviour is not only the responsibility of the drivers; cyclists must also do their part to create a safer travel environment for all.

Dark clothing, no helmet, no light, no glasses, no gloves. The illegal bits are no bell and no pedal reflectors – Oh and riding on the pavement of course!

A frequent mistake that new cyclists make is riding in the gutter or too near the pavement. This may feel safer but it is actually very dangerous. It encourages drivers to make that close pass to get past you when there is not enough space. You are less visible not only to cars but also pedestrians who may step out into the road. If there is an obstacle ahead, or a pothole, you have less space to avoid it. It is safer to ride in the centre of the lane when travelling at the speed of the traffic or when you believe it is not safe for the following car to overtake you. 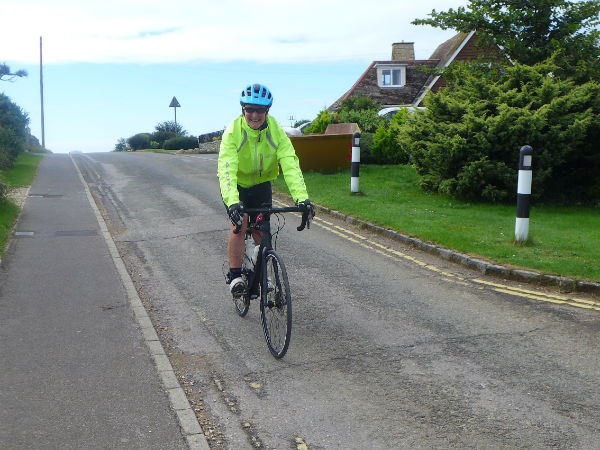 Fluorescent and reflective clothing will help make you more visible to other road users.

I passed my driving test a very long time ago but I can still here Stan my instructor saying ‘mirror – signal- manoeuvre’. It is no different on a bike. A cyclist needs to glance behind frequently so they know what is going on behind them. If they are planning a change in direction then before anything else look behind and check what is going on. If possible make eye contact with those around you and then make a clear hand signal to indicate your intention. Only when you are sure your intentions are clear make the manoeuvre.

Make that manoeuvre in a very positive way. If you are coming to a junction or a roundabout, be in the middle of the lane. Do not allow a car to move alongside you. Stay in the centre of the lane and this allows you to move off safely.

It is much safer for cyclists to think like a motorbike when it comes to overtaking. Motorised vehicles are trained to expect other vehicles on the right. This is a safer place to be. Cycling along the nearside of vehicles is very dangerous as they could turn into your path at any time. I think the safety of cycle lanes to the left of the main carriageway which are not separated from the main traffic compromise the safety of cyclists using them.

When I am cycling in traffic or in an urban area I have my hands permanently positioned on the brake levers so that if there is suddenly a need to brake then I’m ready.

Cyclists seem to think it is cool to make half hearted gestures to indicate the direction they are going in. Cars are unlikely to see this. As a courtesy to all road users your arm should be straight out. This shows authority on the road and is a clear indication of your intentions. Check behind before that signal and move when you think other road users know what you are going to do next.

It makes sense to be visible to road users by wearing bright colours, and having flashing lights and reflectors on your bike. The clothes you wear are personal. Wearing a helmet is also personal and some cyclists choose not to do so. I always wear a helmet. I need a new one as I had a collision last week which meant my helmet hit the tarmac with some force causing it to be damaged. My head was undamaged. As I say – I always wear a helmet.

The things that seem to annoy car drivers most are those that result in the cyclist making better progress that they are. Some are legal like choosing the road over a cycle path or riding two abreast. Some are illegal – like jumping a red traffic light.

I’ll finish where I started. We are all on this road together. We all have equal rights. If we all treated each other with patience, kindness and courtesy the roads would be much safer for everyone.