In the summer of 2018 the idea of cycling Ireland end to end presented itself. I heard talk of MizMal which I discovered was a ride from Mizen Head to Malin Head in Ireland. You could think of MizMal as the Irish equivalent of Britain’s Land’s End to John O’Groats (LEJOG), but with rugged coastline, Irish music, unique landscapes and lively pubs. Like LeJog there is no set route. I had a look at the map, and this seemed like a good thing to do. However, it was apparent that the logistics of getting to the start and away from the finish were problematic. Both the headlands are quite remote and are not served by public transport. Shying away from an organised trip we explored various avenues of doing MizMal but gradually came to the conclusion that it would be more of a challenge to ride right round the coast of Ireland – taking in Mizen Head and Malin Head and therefore overcoming the logistical problems.

So our route was MizMal with the Wild Atlantic Way.

The tour continued to the Ancient East with the Causeway Coast and continued down the east coast through Belfast and Dublin and back to our starting point at Rosslare.

The Great Lighthouses of Ireland

We added visits to several lighthouses to give the whole tour a theme. 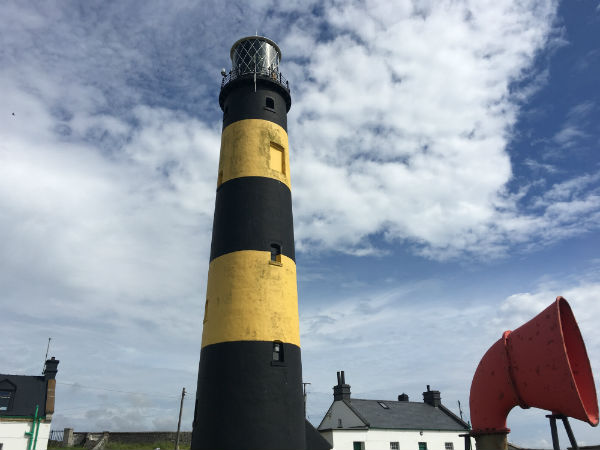 We set ourselves a limit of about 2000km with 20,000m of elevation and 3 weeks to do it. So roughly 100km with 1000m of elevation a day. This was not too scary for me but Ian had not ridden more than 70k in a day, ever, so it was an unknown for him. He didn’t get a grip with any training beforehand so Day 1 of the tour was his longest ride ever – and so it went on. It was a journey into the unknown for him.

We planned the route out beforehand but only booked the first couple of night’s accommodation so that we could be flexible about the route each day. We knew the famous wet and windy Irish weather would dictate how we got on. We left our car at Fishguard and did not book the return ferry so that if we found the whole thing too much, we could just pack in and get back to Rosslare by the easiest method (we imagined using an engine of some sort) get the ferry back to Fishguard and go home!

We have become well practised at travelling light and we had just 2 light panniers each.

The bikes with light luggage

We stayed in bed and breakfast or hotels and used booking.com to book the next nights’ accommodation. This worked extremely well even though June turned out to be quite busy in the hotspots.

We do not like crowds or cities so our route avoided the main sights of the South in Cork and Kerry. We decided against the Ring of Kerry as we heard it to be busy and potentially dangerous with a lot of tour buses.

Our route was planned using smaller roads as much as possible. Although we did a lot of research we didn’t really know what it would be like. As it turned out it was mostly lovely with some spectacular scenery and unexpected beautiful countryside.

Dorset suffered a very wet June but we were lucky in Ireland and managed to avoid persistent rain. We had one 3 hour downpour and four other occasions where we got soaked through in heavy showers. 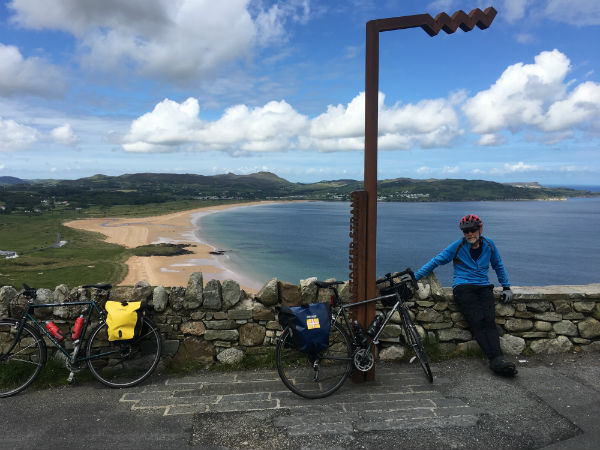 Nice weather for the west coast of Ireland

We chose to travel clockwise and hoped to benefit from a tail wind up the west coast. This didn’t work but we were able to adapt the route to suit the conditions and continued to make progress. Later on we benefited from an unexpected tail wind when  riding south on the east coast.