Mizmal can be achieved in as short a ride as 600km. We had already ridden 400km from Rosslare to Mizen Head and our route to Malin Head was about double the shortest route as we were following the coast and in many places the Wild Atlantic Way.

We approached Mizen Head from Schull and our route gave us a fantastic view of Barleycove Bay. This is a popular beach in the summer despite its remoteness.

Mizen Head itself is a hot spot for tourism with plenty of parking for coaches, cars and motor homes.

There is a visitor centre and in order to visit the signal station you have to go through the visitor centre experience. We decided not to and just spent some time enjoying the natural beauty of the headland.

There were many choices to make on our total route around the coast of Ireland. We had limited ourselves to 2000km in total and at this point on our 5th day despite the weather being fantastic, we were not optimistic enough to detour very much from the route we had planned. So it was with some regret we bypassed Sheeps Head peninsula and the Bearra peninsula. We had been advised against cycling around the famous Ring of Kerry as this is the most popular circuit for coach tours.

From Mizen Head we had a lovely ride to Durrus and then climbed up a huge hill before dropping down into Bantry. It was market day and the town was lively and bustling in the sunshine. We continued through to Ballylickey on the River Ovane where we stayed overnight. 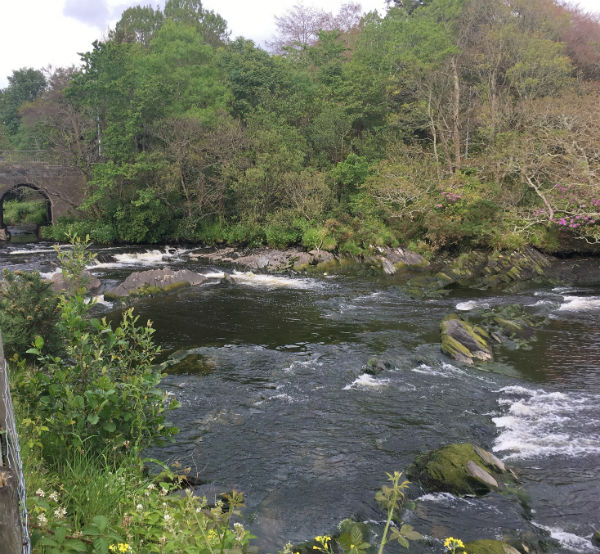 We were quite nervous about the ride because it was a long way and also because it started with a big pass. The first 15km went from sea level to 400m. It is difficult to find out in advance what the road would be like but we could tell that it was quite remote and single track. We just hoped that the surface would be reasonable. In the event our worries were unfounded and we really enjoyed the steady climb up to the pass despite a shower of rain. The scenery was superb and there was hardly any traffic.

Lovely scenery on the climb from Balleylickey to Kilgarvan.

The top of the pass took us from Cork into Kerry. The road does not even appear on most maps but it turned out to be a great route choice. We rejoined civilisation at Kilgarvan.

Top of the pass took us from Cork into Kerry.

From Kilgarvan we went to Killarney which we largely bypassed and followed a route through the demesne and golf course which spat us out on the R563 to Milltown and on to Castlemaine.

From Castlemaine we followed the road beside Dingle Bay which gave great views across to the Macgillycuddy Reeks. We continued through Inch and onto the famous surfing location at Inch Beach. 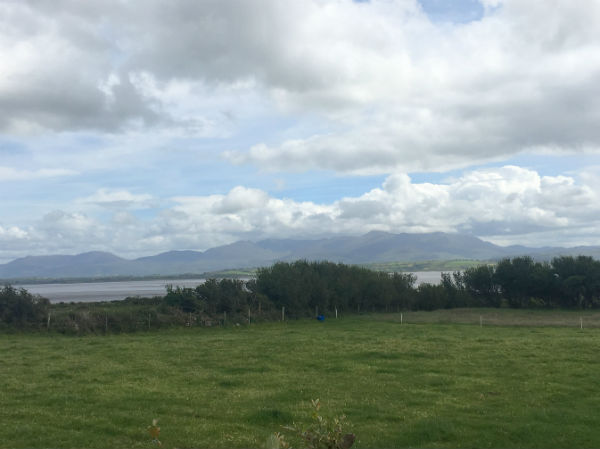 The Macgillycuddy Reeks across Dingle Bay.

Inch Beach was very quiet with not much surf. It is located on a 5km long sand spit in Dingle Bay. It is a popular spot for water sports including surfing, windsurfing and kite surfing. We continued our ride inland to Annascaul where we stayed the night.

Annascaul is a small village and is famous for being the birthplace of Tom Crean who was part of Robert Scott’s ill fated attempts to reach the South Pole and Ernest Shakleton’s epic open boat journey from Elephant Island to South Georgia. The South Pole Inn in the village was owned by Crean and as well as serving a very nice pint of Guinness has interesting displays of Antarctic exploration and Crean’s life.

We left our panniers at the B and B and had an unloaded ride along the Dingle Peninsula out to Slea Head. The road to Dingle was busy despite it being early on a Sunday morning. We got soaked by an aggressive hail storm and got really cold. I really considered abandoning the ride at this point. However the weather improved and the scenery became more and more fabulous as we rode along the peninsula. 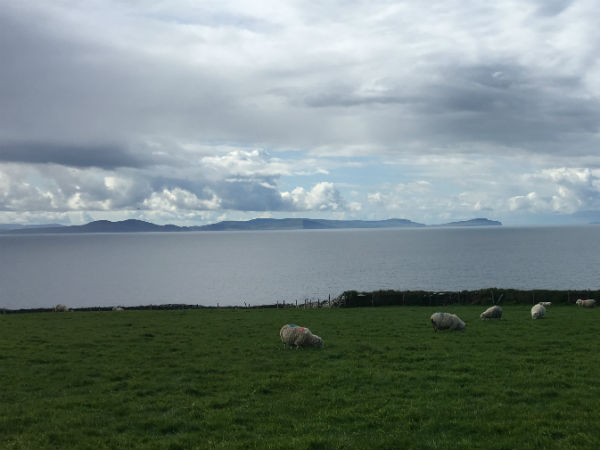 View from Dingle peninsula to the Ring of Kerry.

We cycled towards Slea Head passing prehistoric Dunbeg Fort and bronze age beehive huts. The locals cash in on these sights and persuade the contents of the many tour buses to stagger a few hundred yards and part with a few euros to explore more thoroughly.

The weather improved and we enjoyed some wonderful scenery as the Blasket Islands came into view.

Slea Head is a well known and recognised landmark and a very scenic viewpoint with a dramatic view of the Blasket Islands. We rode as far as Dunmore Head which is the most Western Point in Ireland.

The Slea Head Drive around the Dingle Peninsula is very scenic and it is also extremely popular with tour buses. The road is narrow so speeds are generally low but we still didn’t like it much.

We rode back to Annascaul and picked up the panniers and continued to Tralee where we spent the night.

We stayed at Sean Og’s ‘Drinking Consultants’ in Tralee . Most hotels have somewhere for the bikes to be tucked away securely but at Sean Og’s we had to put them in our room which was on the 4th floor! 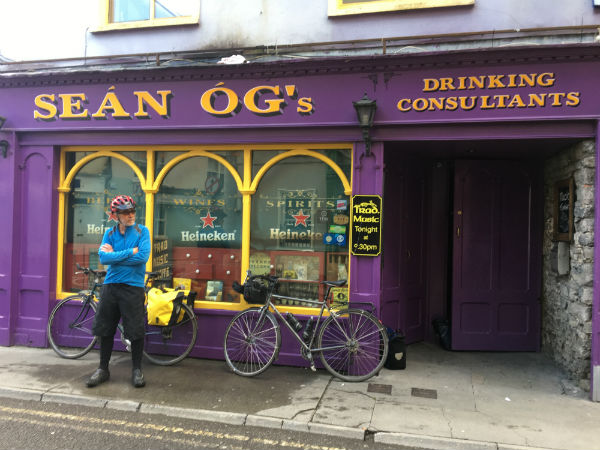 The weather had been much drier than we expected but the wind was from the north which was unexpected. The forecast for the next few days was for a strong northerly wind which would make progress more arduous and slower than expected. We decided to change the route somewhat and miss out the planned ride to Loop Head the following day.

Tralee is the county town of Kerry and located at the head of Tralee bay at the confluence of two small rivers. Our day started with a long climb up out of the town into the forecast head wind. We went directly north towards the river Shannon passing through Listowel to Ballylongford. The village is situated at the top of Ballylongford Bay on the tidal estuary of the River Shannon. The River Shannon is the longest river in Ireland and is an incredible 360km long. It drains the Shannon river basin which covers one fifth of the area of Ireland. The river is a major barrier between east and west and has thirty five crossing points between Limerick City and the village of Dowra in the north. 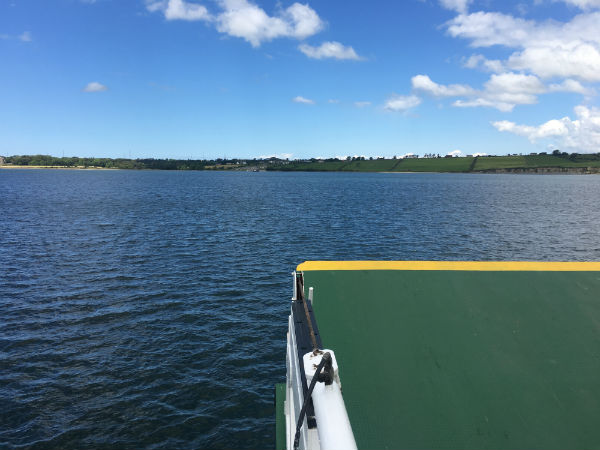 Car ferry across the Shannon.

We crossed on a ferry from Tarbert to Killimer. 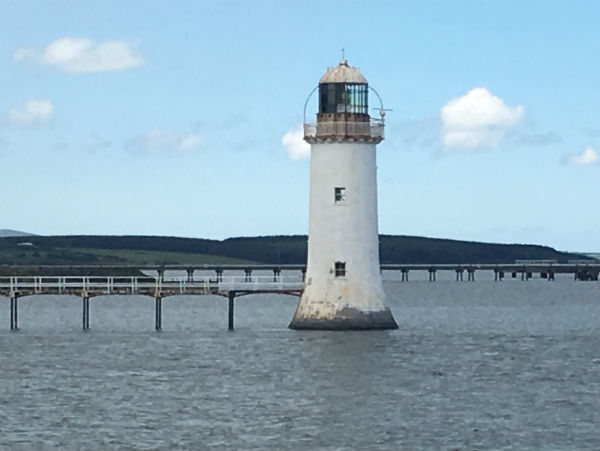 The Tarbert lighthouse cannot be seen from land but we had a good view from the ferry. It is a 22 metre high stone tower painted white which was built in 1834.

At Killimer we followed the revised plan of riding north to Milton Malbay as the headwind was very strong . We rode through very pleasant but unremarkable rolling countryside in County Clare. We started to notice American Stars and Stripes. Then at Creegh the whole village was decorated with the American flag. A look at the map informed us that we were close to the Trump International Golf Links and Hotel just north of Doonbeg. President Trump had visited the day before to stay at the hotel whilst in Europe for the 75th D- Day Anniversary commemoration. 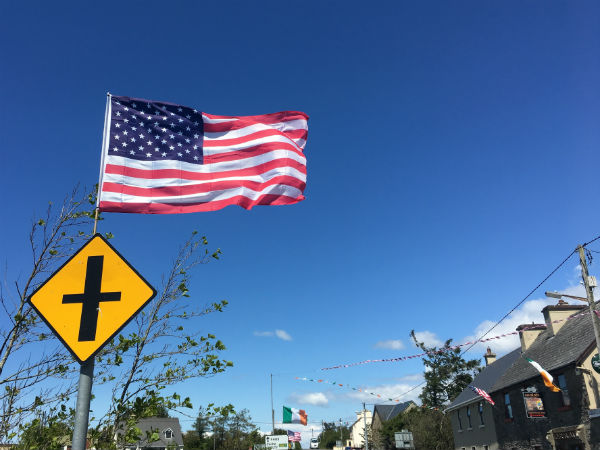 The Stars and Stripes flying well in our northerly headwind.

The 87km into the headwind finally ended at Miltown Malbay and I definitely earned my pint of Guinness.