There was rain in the morning as we left Lovesome Hill. The Cleveland Hills were on the horizon but we had 7 more miles of flat, boring agricultural land to get through before reaching Ingleby Cross and the start of the North Yorkshire Moors. This flat land is very tedious. 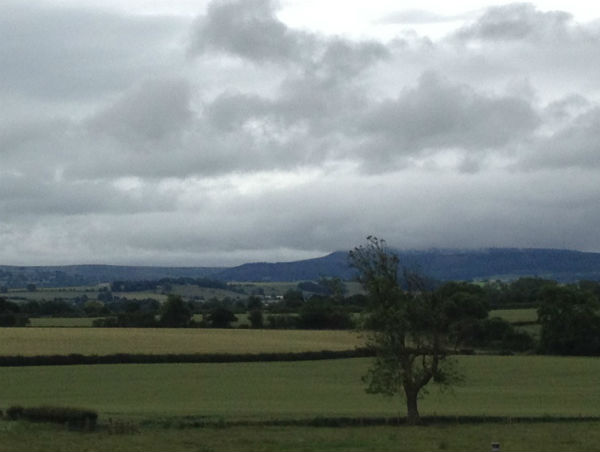 Only another 7 miles of tedious flatland to cross

The crossing of the railway changed the scene. 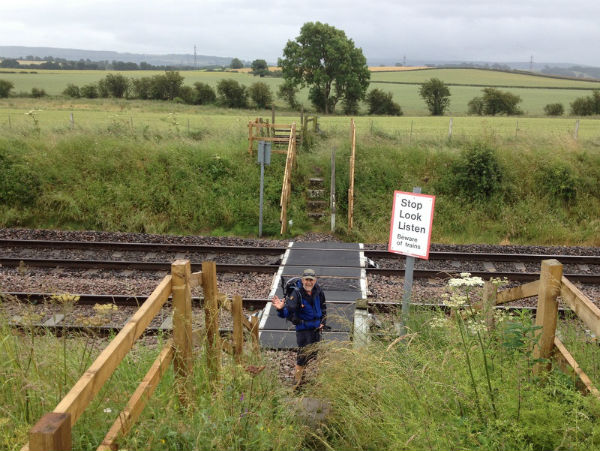 The Blue Bell Inn at Ingleby Cross provides accommodation for C2Cers and were able to supply us with a large cafetière of coffee for which we were very grateful. We had covered the ground from Lovesome Barn very quickly and were ready to climb a hill!

I was born close to here and lived in this area until I went to University. The Cleveland Hills were the setting for my early adventures into the outdoors so I hold them in special affection with memories of the ascent of Roseberry Topping as a very young child. An expedition across the moor staying at Westerdale Youth Hostel was undertaken at Junior school and I remember hikes across the moor accessed from Battersby station up to Captain Cooks Monument with the Girl Guides as real adventures.

At last a hill. We climbed up past Arncliffe Hall to Beacon Hill. The route follows forest roads and then a smaller path through scrub to emerge at a TV booster station to arrive at Ordnance Survey column S. 4413.

Beacon Hill at less than 1000 feet is a splendid viewpoint, the panorama being greatly enhanced by its abrupt rise from the plains. Southwards is the Vale of York, westwards is the Pennines beyond the Vale of Mowbray (which we have just trudged across) northwards are the hills of Durham and Teesside and its diminishing industry. However our line of march is to the East and it looks promising.

The North Yorkshire Moors extend for 30 miles from the Vale of Mowbray to the east coast. They are unenclosed, uninhabited, heather clad and free from traffic. The wilderness is crossed by few roads and the geographical boundaries are clearly defined by the valleys which surround the upland. To the north is Teesside, to the west the vale of Mowbray and to the South is the Vale of Pickering. The Eastern boundary is the coastal strip. Separating the valleys are high ridges of moorland.

We had three miles of beautiful walking to Carlton Bank which was our destination for the day. There are three long distance walks along this section. The C2C, Cleveland Way and the Lyke Wake Walk.

The Cleveland Way is a National Trail and therefore gets funding from Central Government to help maintain the path. There were no boggy sections to yomp through – the eroded sections are long gone and carefully paved in local stone..

The path has fine views over the moor. It drops down into Scugdale. Scugdale is one of the many Cleveland valleys mined for jet. There are spoil heaps high on the moor left over from the workings.

The climb up from Scugdale is steep and through the forest with many fine deciduous trees. Once emerging onto the open moor, the plateau at Live Moor is the next objective.

The cairn on tumulus summit of Live Moor

The views to the north and west continue unhindered and now the sea at Tees Mouth is clearly visible.

Teesside and a glimpse of the North Sea at Tees Mouth

The ground was covered in heather just beginning to turn purple as we followed the path on the gentle rise too Carlton Moor. There has been a gliding club on the moor in the recent past but much of the runways and huts have been swallowed up by the encroaching heather.

The gentle rise continues to Carlton Bank which is topped by another Ordnance Survey column S 4421. This is another bold viewpoint with far reaching views.

The Ordnance Column on Carlton Moor

Down from the trig point the road along the edge of a crater from a former alum mine is reached in 10 minutes. Journeys end for today.

There is no accommodation on this stretch of the path so local hotels will arrange to pick you up and return you to the path the following day.