We left Lion Inn on the road up to Rosedale Head. There was a wide verge so we made very quick progress to the north. We kept on the road around the head of Rosedale, as although it was tempting to take a shortcut across the moor, it would have been hard work walking through the bogs and heather.

The Danby high moor is typical of the country around here. It is now uninhabited and inhospitable but there is evidence that primitive people lived here thousands of years ago from the many burial mounds and barrows.

Way marks across the top of Danby high moor

We turned off the road at Trough House, which is a hut used by shooting parties on the moor, then followed the track around the head of Great Fryupdale which leads to Glaisdale Rigg. The wide and gravelly track gives excellent walking and views of Eskdale with a glimpse of Roseberry Topping now 10 miles away to the North West.

There is a short section of road before turning onto Glaisdale Rigg at a fine cairn reminiscent of those on Nine Riggs Standard.

The track used to be an important link but it is now little used. It descends directly down Glasidale Rigg leaving the moor behind. Civilisation is reached in the village of Glaisdale. The village is served by train and straddles the entrance to a side valley at its confluence with the River Esk.

Glaisdale is a mixture of old and new, but its setting in the luxuriantly wooded Esk valley is charming. The valley is pleasantly wooded and we set off alongside the river Esk.

The Coast to Coast now follows the Esk Valley through East Arnecliffe Wood to a small lane that leads down to Egton Bridge where the Esk is crossed.

A good track signed to Grosmont is followed.

A good track to Grosmont

This track follows the river on the private driveway through the private estate of Egton Manor.

The Toll Bar notice is still displayed and gives details of the tolls formerly charged – these being made for the passage of the living and the dead!

Charges for the living and the dead

The track emerges at Grosmont where the North Yorkshire Moors Steam Railway has its headquarters.

The road out of Grosmont is steep and long but a quick way of gaining elevation.

It was great to be back on top of the moor again with much evidence of ancient life. The Low Bride Stones almost hidden in the bog and heather of moor are a highlight, but there are many other barrows and tumuli hereabouts. 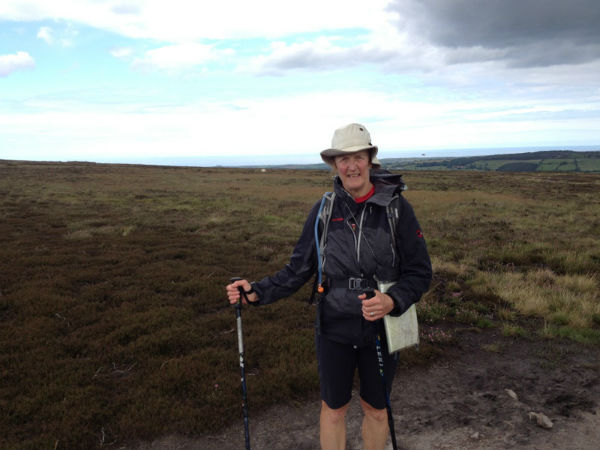 The moor above Grosmont

Our overnight accommodation was at Intake Farm so when we reached the A169 we deviated down to High Quebec Farm and walked directly to Intake Farm.

As we walked down to the farm we had a fine view of the coast at Robin Hoods Bay.

Robin Hoods bay in the distance