We left Intake Farm and walked down to Littlebeck where we crossed the eponymous stream and then followed it to along a woodland trail to Falling Foss. The path rises gently to a massive boulder out of which has been carved a splendid shelter with seats. The lettering, ‘G C 1790’ is inscribed into the stone. 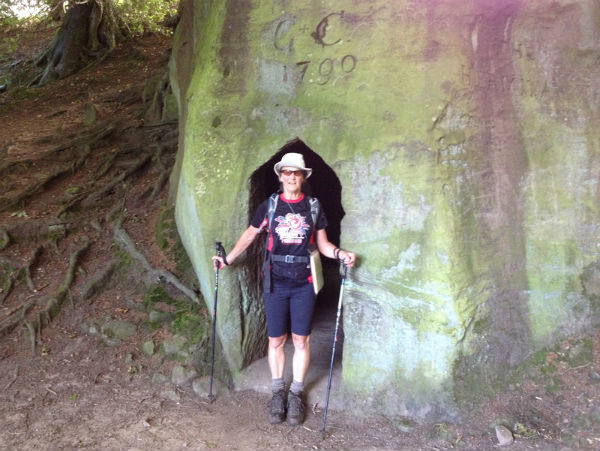 Following the forest trail the waterfall of Falling Foss is reached. 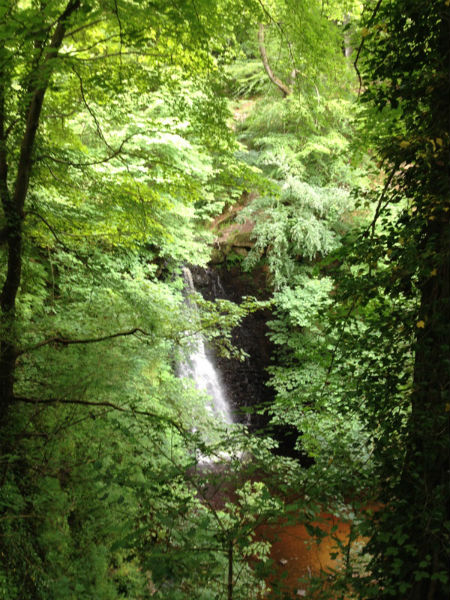 The path follows May Beck until a car park is reached and once again the Coast to Coast route heads up for one last time onto the moor.

At this point we left the route that most people follow. I was born not far from here and many childhood holidays were spent in this area. I really wanted to finish our C2C at Whitby so rather than approach Robin Hoods Bay from Hawsker in the North the way Wainwright suggests we routed our approach from the South.

From May Beck we crossed Low Moor to the A171 and then followed a bridleway across farmland through Fyling Old Hall. 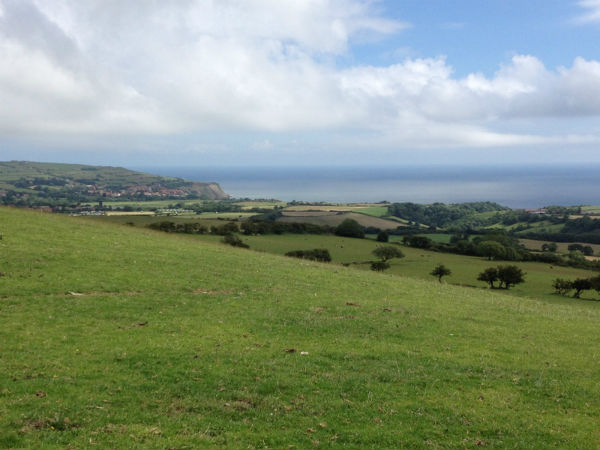 We arrived at the North Sea at Boggle Hole. I stayed at this youth hostel in 1964 on a trip from my Junior School. 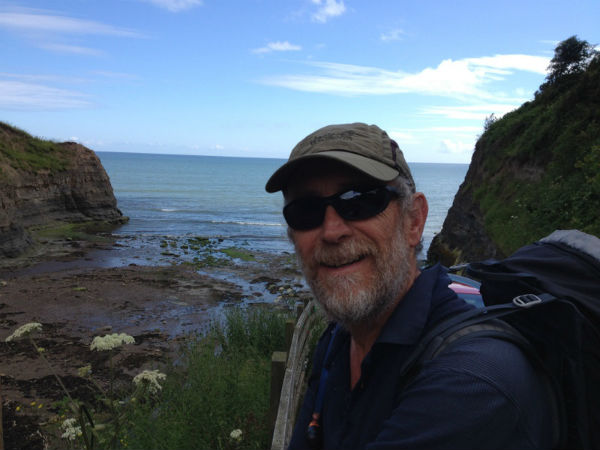 Boggle Hole, we have reached the North Sea

We climbed up out of Boggle Hole and followed the coast path towards Robin Hoods Bay. 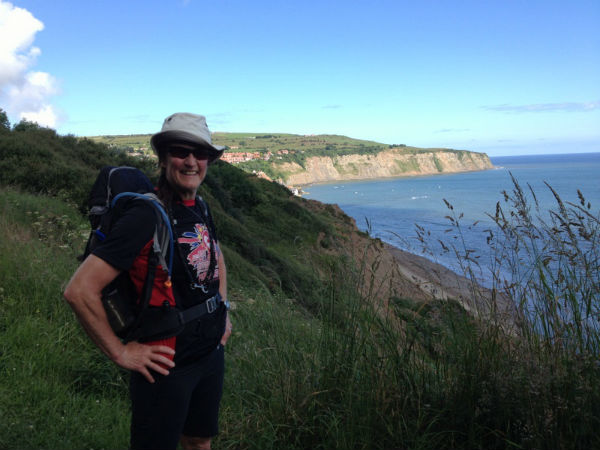 The coast path from Boggle Hole to Robin Hoods Bay

On entering Robin Hoods Bay we had a bit of a shock. It was so busy. The village is in quite a confined space and it was very crowded. 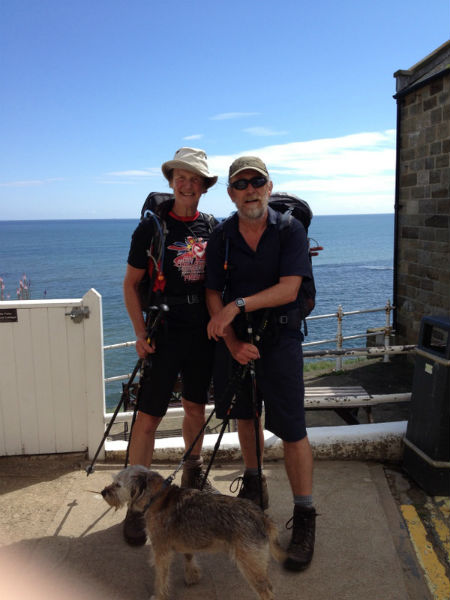 The team at Robin Hoods Bay 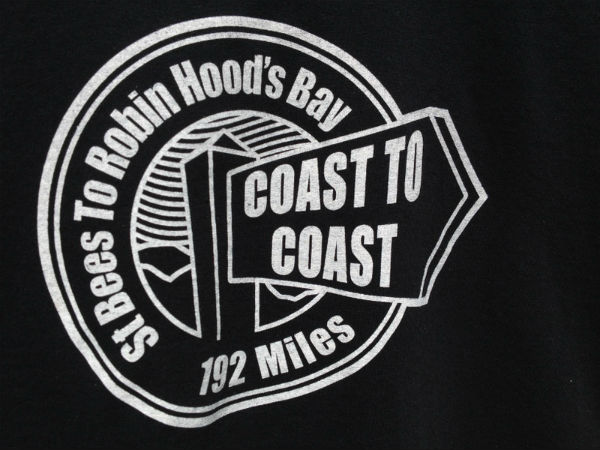 We saw the T shirt but didn’t buy one!

We marched on away from the crowds to the Coast Path. 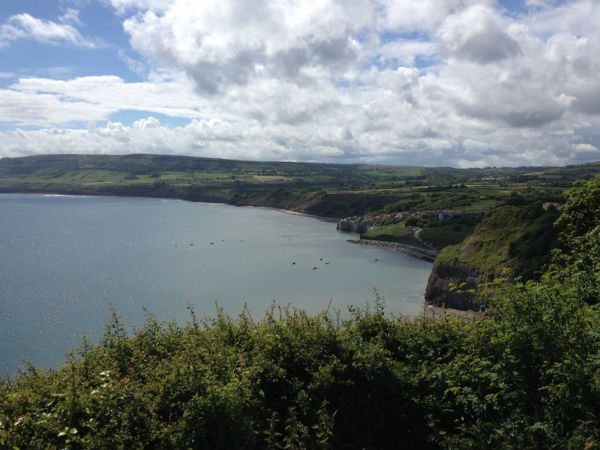 Leaving Robin Hoods Bay without even stopping for a beer

The coastal scenery on one of the rare hot sunny days on the North East coast was fantastic with wonderful views. We were lucky to have such a lovely day to celebrate walking these last few scenic miles. 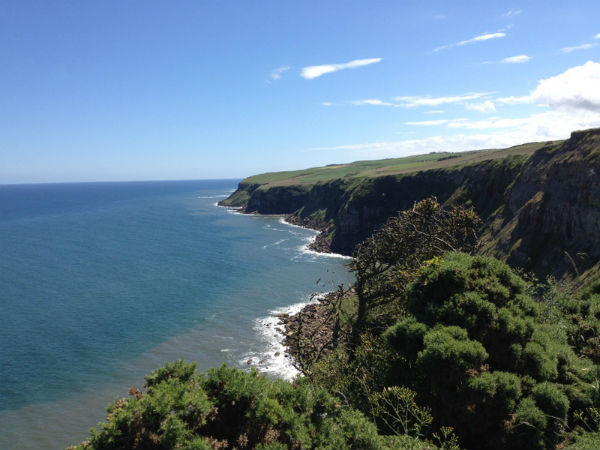 The distant view of Saltwick Bay and Whitby Abbey drew us along. 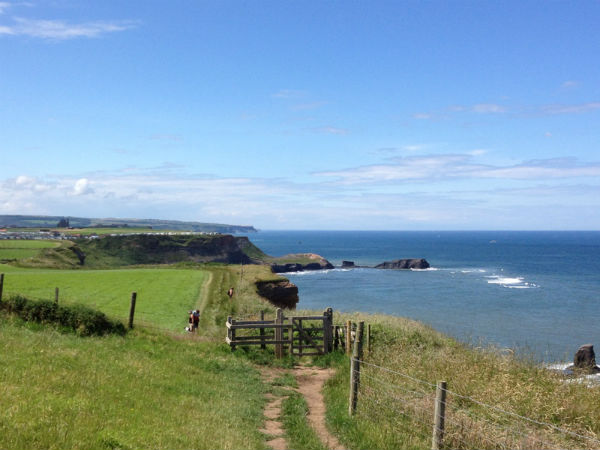 Saltwick Bay with Whitby Abbey beyond

We arrived at Whitby where Whitby Abbey is perched high on the top of East Cliff. The abbey is a ruined Benedictine Abbey.

Ian had set his heart on a cider lolly to celebrate completion of the C2C and luckily Mr Whippy was there to fulfil his dream. 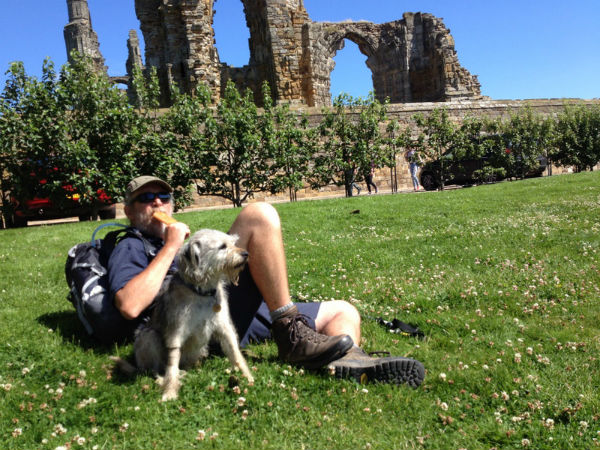 All that remained was the stroll down the 199 steps from the abbey down into the town. 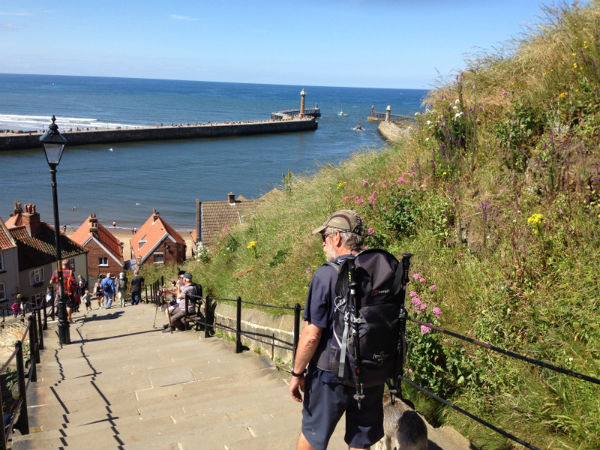 Down the 199 steps from the abbey down into Whitby

The town’s maritime heritage is commemorated by statues of Captain Cook and William Scoresby, as well as the whalebone arch that sits at the top of the West Cliff. The town also has a strong literary tradition and has featured in literary works, television and cinema, most famously in Bram Stoker’s novel Dracula.